Latest Blog Posts
Related Content
BlogRoll
Latest News
Download Computer Weekly
I think that when most of us think about gadgets, we imagine gee whizz things like phones and PDAs and PDAs that are phones. This is, of course, a curious hangover of the thirst for capitalistic acquisition fostered during Thatcher’s 80s and continued in New Labour’s validation of the post-societal libertarianism of the 90s. Or something.
So it’s no wonder that we occasionally overlook some of the very best gadgets because they’re not glossy, glitzy or sexy.
The trigger for this train of thought was a hot laptop. My girlfriend’s hot laptop, in fact. And, by “hot” I mean that you can fry an egg on it – not that it’s some brand new top of the range shiny thing.
I’ll name and shame, for the sake of journalistic honesty. It’s a Toshiba Satellite A120. And, blow me, if it doesn’t run hotter than Kylie’s bottom.  Of course, there are extant reasons for this. I maxed out the RAM a year ago, for example. It’s getting on a bit now – about three years on the clock. The vents in the side will have sucked in a lot of dust during that time and dust is a very good and keeping heat in.
I looked for solutions that wouldn’t involve buying a new computer and, having dismissed buying and fitting a new fan as too much faff, settled on an external laptop cooling system.
Here’s where it gets interesting. The device we plumped for was a Belkin Laptop Cooling Stand. It’s simply a plastic, contoured board big enough for your computer to sit on.  Your machine stays put thanks to two strips of rubber material, while air flows freely underneath. Finally, a small fan blows cold air onto the bottom of your notebook, powered by USB. 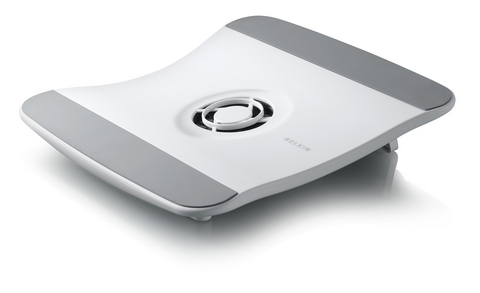 For such a simple device the results were astonishing. The dual core CPU had previously been running at a warm, but still safe top temperature of 46 degrees Celsius. With external cooling, that dropped to an average of 24 degrees C. Wow.
Total outlay for this striking improvement? £11.99.
So – take heed from this story. Sometimes the best gadgets aren’t the ones that empty your wallet.
SearchCIO
SearchSecurity
SearchNetworking
SearchDataCenter
SearchDataManagement
Close