Latest Blog Posts
Related Content
BlogRoll
Latest News
Download Computer Weekly
A lot of people have complained that the new iPad Air isn’t different enough from the previous iPads to justify the asking price. After using it though, I think that it’s just different enough in all the right ways.
It’s thinner, lighter and slicker than previous iPads, not far off an iPad mini in feel, with only millimeters in the size difference, plus the black matt ‘space grey’ finish now available gives it an air of sophistication that the silver of the iPad 2 just didn’t have. It’s light to hold, and can easily be operated in almost any situation, increasing portability.
At less than half a kilogram, it claims to be 20% thinner and 28% lighter than previous models, and it’s a noticeable difference. The bezels are closer to the screen, bringing the width in without affecting the content.
Now that it’s smaller and lighter, it’s easier to fit into even the most conservative of bags, and is ideal for taking notes in meetings, or for portable working if you’re on your feet all day. It also has two antennae allowing ultra-fast wifi with download speeds of up to 300 Mbps, which is almost double that of the previous iPad, suitable for those looking for a device to integrate into a BYOD plan using desktop virtualisation. Or it’s perfect for sending e-mails and surfing on the daily commute.
Where WiFi is unavailable, the iPad Air is supported globally on data networks if you have a SIM for it, ensuring connectivity around the world. It can also be used to create a personal hotspot, connecting devices around it to the internet, which might be useful when others are using less powerful devices, or devices that cannot use cellular data for web access, so meetings can be set up pretty much anywhere.
The new A7 chip makes it twice as fast and graphically capable, and it certainly comes across that way. It also includes an M7 co-processor for that bit of extra juice. The battery also seems to last an age, especially in standby. 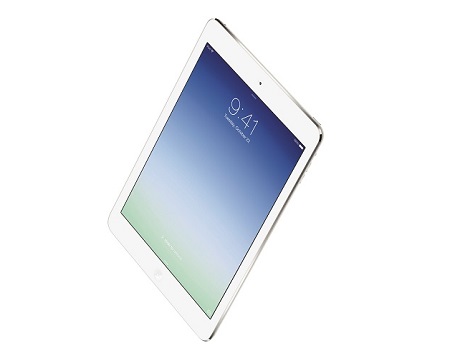 The touch screen feels oddly spongy, but is crystal clear, and perfect for graphical work or watching film and TV. The parallax blur effect that everyone has been moaning about was a nice novelty, not quite as exaggerated as I thought it would be, and even works when you set your own background. Staring at the screen for too long can hurt the eyes, but the brightness can be adjusted depending on taste and requirement.
If you’ve been clever about backing up a previous device, the setup is simple. Only previously having an iPad 1, I was worried that the difference in iOS would be an issue, but the upgrade to iOS 7 came alongside the backup from iTunes. Unfortunately backing up from iTunes meant that some information had to be entered twice, such as the wifi password, but it’s a small price to pay to get up and running quickly. The new control panel with iOS 7 brings all of your needs to the flick of one finger, a simple change that makes a big difference.
Upon entering the app store, I was directed to download a host of free Apple applications for business use, including pages, numbers and keynote, all for free to allow you to seamlessly transition to portable working if needed. Of course if you have iCloud, integration of e-mail and calenders is also available for reminders, appointments and e-mail on-the-go.
iOS 7, although a big step forward, is refreshing in comparison to iOS 6. The vibrant colours, rounded edges, and plain stylisation makes for a trendy update.
This gadget is a nice improvement on previous Apple products, or a good first tablet, perfect for the run up to Christmas.
Thank you to Eb uyer for providing the iPad air for review. Take a look at Eb uyer’s 12 days of Christmas competition starting on December 1st, where prizes will be given out every day for the first 12 days of the Christmas month. You can enter every day, and could even win your very own iPad Air.