The Kyvol Cybovac S31 Robot Vacuum sucks – and we mean that. But here’s the thing, we mean it in a good way.

One might argue that robot vacuums have been brought to market before their time i.e. the first batch were noisy, held a limited battery charge, were prone to ‘vomiting’ their load back onto the floor if not emptied in time and were really only suited to performing a superficial perfunctory ‘dust around’, rather than anything approaching what you would call a deep clean.

The Kyvol people seem to have taken that reality on board and markedly upped the game with the latest product.

But before we get into the details, let’s talk about the out-of-box experience.

Either the Kyvol people experience a lot of earthquakes where they pack these products, or they just really don’t want your robot to get damaged in transit. The unit itself is packed in heavy-duty recyclable cardboard so thick you could probably use it to break apart your old vacuum before you get rid of it.

The packaging is nice, it feels like you’re getting a quality product and it’s simple enough to plug it in and get it charging with only a quick look at the instruction book. The initial charge does take a couple of hours, so that’s plenty of time to read the whole user manual, which is recommended as you’ll want to know what programs to set it on once you start cleaning.

Let’s take a look at some of the key facts, stats and functions of the Kyvol Cybovac S31.

Unlike previous earlier models, auto dirt disposal is now the order of the day and Cybovac S31 will return to its base when you tell it to (or when the cleaning program has been completed) and empty its load with a fairly theatrical set of noises, whirrs, clicks and bleeps.

With the charging base, Cybovac S31 is able to hold dust for up to 60 days, saving us the trouble of frequent emptying.

Again a huge improvement on earlier devices in this space, the Kyvol Cybovac S31 is really quiet. Where early units would stop you from being able to listen to the television when running, this (which combines a mop function alongside the vacuum function) runs (when in standard mode) at only 45 dB (decibels) which is not louder than a working microwave.

The laser navigation system allows Cybovac S31 robot vacuum to choose the most effective cleaning path and to create a real-time home mapping. With 240 minutes (four hours) of runtime from full charge, the S31 vacuum cleaner picks up dirt, pet hair and dust hidden inside carpets with its suction of up to 3000Pa.

As noted on Amazon, Pa is a unit of measurement for atmospheric pressure. For example, if vacuum power is 1K Pa, a device can only suck dust. If the power is 8.5K Pa, the vacuum is able to handle dust and hairs.

There is also remote cleaning & voice control. According to Kyvol, “Select the cleaning modes, set no-go areas, or scheduled cleaning, you only need a few clicks on Kyvol app. Plus, you can control S31 by your voice with Amazon Alexa and Google Assistant.”

These units aren’t cheap. Kyvol’s latest product here comes in at US$599 and competitor products are priced at around this price point too. This means it needs to be more than just a toy, unlike some of the first-generation products.

So overall, the Inspect-a-Gadget elves were quite happy with the Kyvol Cybovac S31 Robot Vacuum and could see a place for this robot vac.

But our opinion pales in the face of the ultimate vacuum stress-test: parents.

Most of us have parents that seem to be somehow irrationally attached to their vacuums. We took the Kyvol Cybovac S31 Robot Vacuum and gave it the parent stress test without thinking it would go down well.

Already wedded to their Shark handheld vacuum, our parents were strangely attracted to the appeal of the Kyvol unit almost instantly. After a process of personification and naming the Kyvol “he” (it just sounds like a male name more than a female one, apparently), our folks jumped on the chance to set Kyvol off dusting and sucking around with gay abandon.

Impressively, the Kyvol Cybovac S31 Robot Vacuum worked its way around the Christmas tree with presents underneath without the need for the magnetic strip.

“Well, I didn’t expect to like this device as my wife seems to enjoy making me get the traditional vacuum out up to twice a day and cleaning up after I have my breakfast cookies and other morsels in the kitchen,” said Ernie, in his role as father of the house, patriarch and all-round good guy.

“But I tell you, the instructions are simple and this little guy really does a good job cleaning up. Our family has a new dog too, so when Dillon gets down on our carpet it’ll be an extra test that I’m looking forward to using as a benchmark. I just call him ‘Robot’, but I think he knows I’m talking to him,” he added.

The Kyvol Cybovac S31 Robot Vacuum sucks at ‘not sucking’, because it sucks so well. Okay so that might not make the best marketing slogan, but you get the point i.e. robots are here to stay with us so they may as well help us clean up the house. 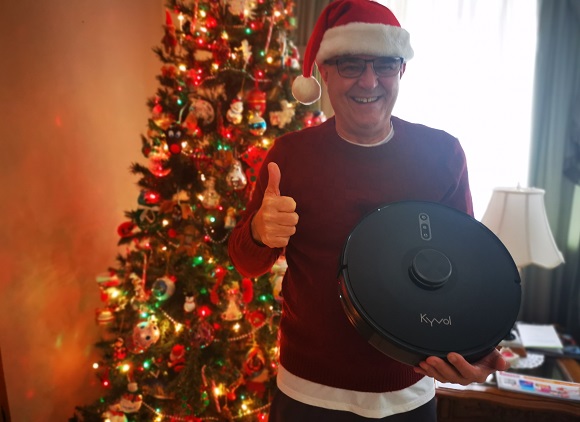 Ernie says: it sucks, I mean, it doesn’t suck, because it sucks to well.