Usually around Xmas time most people resign themselves to the fact that the X Factor winner will get the coveted title of ‘Xmas number one’ and have it rammed down our throats everywhere we go. But not this year, this year the majority had the chance to make a difference, and change history! 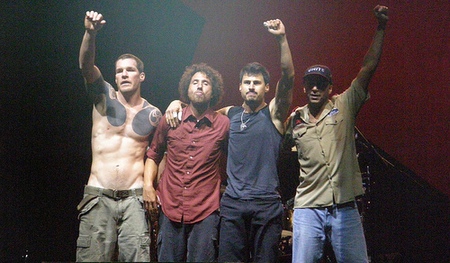 I’m a massive Rage Against The Machine (RATM) fan. Since ‘Killing in the name’, from their self-titled album, was released back in ’92 I’ve been listening to lead singer Zack de la Rocha spitting lyrics against Tom Morello’s genius guitaring and can proudly say that I have seen these rap-metal legends in the flesh a number of times.

But this post isn’t an homage to one of the greatest bands of all time, oh no. This is a post in awe of the digital age. What an incredible year it has been for technology and this event just shows how massive 2009 has been for the tech industry. 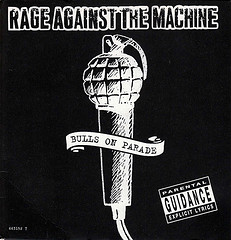 ‘And now you do what they told ya, now you’re under control‘ Rage against the machine – Killing in the name

So, Jon Morter, 35, a part-time rock DJ and logistics expert from South Woodham Ferrers (near Chelmsford) decided to ‘rage against the machine’… literally, and start a campaign to get RATM to the number one spot in the UK ahead of X factor winner Joe McElderry.

Now, Jon tried this last year and had some success getting Rick Astley’s Never Gonna Give You Up into the chart but failed as X Factor’s Alexandra Burke took top spot.

He probably would’ve made it if he’d had the advancements in tech that 2009 offered.

It all started as a fan page on Facebook called ‘RAGE AGAINST THE MACHINE FOR CHRISTMAS NO.1’. The fan page currently has over half a million fans, more than the official RATM fan page.

The page directed people to iTunes and other music sites where you can buy the single. It gave regular updates as to how many singles had been sold and where the single stood in the charts but it was only in the final week that the sales really picked up. 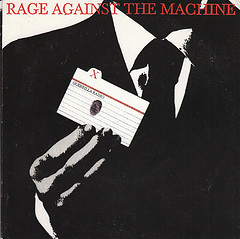 ‘Turn on tha radio, nah f**k it turn it off, Fear is your only god on the radio’ Rage against the machine – Vietnow

So RATM were asked to do an interview on BBC Radio Five Live followed by a live, censored  performance of ‘Killing in the name’. The interview went smoothly as RATM spoke about how they were amazed at the response and defended the fact that they too are signed to Sony records. But it was the performance that stirred the masses.

I find it astonishing and hilarious that the Beeb would think they could censor a song about revolution against racism and freedom of speech on live radio. How stupid are they? Seriously.

The song ends with Zack whispering the famous line ‘F**k you I won’t do what you tell me’ building to a full on rampage. Around 8 min 28 seconds on the video below.

It was this line the Beeb asked to be censored… if the band removed the word f**k then there would be a serious problem with the message.

At first he missed out the F-word but eventually, in true metal fashion, let rip! Before the BBC presenter is heard saying ‘Get rid of it!!’ before the live feed gets pulled.

The presenter then apologises by saying ‘Sorry we needed to get rid of that because we weren’t expecting it… well, we were expecting it but we asked them not to do it but they did it anyway so buy Joe’s record’. Well done, you just made yourself look like an idiot.

‘The rage is relentless, We need a movement with a quickness, You are the witness of change, And to counteract, We gotta take the power back‘ – Rage against the machine – Take the power back

We’d seen Twitter campaigns throughout the year, the most notable ones being:

So what influence did Twitter have? Well, besides the fact that it was a trending topic for a number of weeks, comedian Peter Serafinowicz, told his followers (all quarter of a million of them) to buy the single which basically gave the single the push it needed to finally win the race.

‘Cause I’ll rip the mike, rip the stage, rip the system, I was born to rage against ’em’ – Rage against the machine – Know your enemy

The website, ratm4xmas, was set up soon after the Facebook fan page started to take off and has links to buy the single from Amazon, 7digital, Play.com, HMV and iTunes. The intro paragraph reads:

It’s time for true music fans to make our voice heard – December 13th – 19th 2009 – The week we take Killing in the Name to the Number One spot in the UK charts. Simon Cowell and the X-Factor have controlled the Christmas #1 spot for 4 years, let’s show him that putting out the same predictable dross ballad each year for a guaranteed number 1 isn’t good enough.

Also, RATM pledged to donate the money from the sales of the single to charity Shelter (quite ironic that RATM released a single called No Shelter a few years ago) raising an amazing £64,726. Absolutely incredible. I can’t imagine Simon Cowell being as generous. 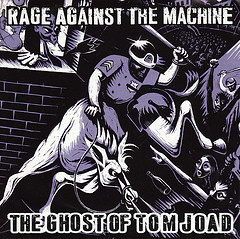 This meant that The Beatles entered the charts after their overdue release in digital format and Michael Jackson’s albums dominated the album chart after his death.

The RATM single is the first ever single to completely rely on download sales to reach number one. The single wasn’t re-released on CD.

The download chart usually looks significantly different to the regular chart mainly due to the fact that it is a certain demographic that buys music digitally. This demographic is still in place, although the coverage of event would’ve broadened the scope quite a bit, but the sheer volume of download sales was what swung it.

What does this mean?

‘No matter how hard you try, you can’t stop us now’ – Rage against the machine – Renegades of funk

The power of the internet. Everyone has a voice online.

People have literally switched on to the fact that, through the internet, the world is smaller and ‘the real world’ can be influenced by the digital one.

For us techies and geeks this is nothing new, but this whole episode has not only got the attention of your Granny and Auntie but it’s also got a few of them on Twitter, Facebook and got them downloading music… ok they’re probably downloading Joe McElderry’s single and not RATM’s but still, it’s another huge leap into what will soon be the norm.

Social media is growing and will obviously be more powerful next year, and it’ll be particularly interesting to see how it affects the 2010 elections. Never mind the music charts.

Pictures from dwhartwig on Flickr except top/first one which is accredited.

Jon Morter - 24 Dec 2009 7:07 AM
Yes it was a fantastic campaign...it was a privelage to have started it...only please note that the 'ratm4xmas' website has NOTHING to do with the actual campaign organisers Jon & Tracy whatsoever and do not speak on our behalf RAGE ON! Jon
[-]

Faisal Alani - 24 Dec 2009 8:28 AM
Hi Jon, first of all congratulations on your campaign. I was completely hooked. I have no problems amending the post, did you set up a website? If so can you send me any details. Thanks