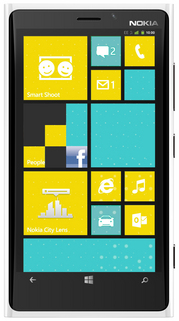 At the beginning of September, Nokia unveiled its new range of Lumia devices – the 820 and the flagship 920 device. Following this press conference, I was genuinely excited about the prospect of this device, it really showed innovation in functions and design, compared to the barely-updated iPhone 5 which followed a few weeks later.

Could Nokia climb its way back up the smartphone ladder to reclaim its crown? Will its integration with Windows Phone 8 seamlessly offer consumers another option from the two giants Apple and Android? Could it actually make a difference to the market?
Boasting wireless charging technology, brilliant navigation features as well as a fantastic camera with many clever editing applications, this could be the game-changer.
Running Windows Phone 8, it also features Office so you can edit your documents from your phone as well as the ability to use many of the new OS’s features including Rooms and Kid’s Corner.
I’ve had my hands on the device for about 24 hours and I am thoroughly impressed. It’s clean and slick and will insanely organise your life within its lovely Windows 8 tiles.
It’s very large – 10.7 mm wide and  30.3mm long – and has curved edges. I think it fits nicely in my (albeit large for a woman’s) hands, and it feels secure and really nice to touch. Although it is a plastic shell rather than metal, to me it feels soft and warm rather than cool, rigid and expensive.
Windows claim you can sync your existing iTunes account, and it has got me thinking I could perhaps ditch my iPhone for this much sexier model. I always think that I’m trapped in Apple’s ecosystem after spending god-knows how much on apps. But thinking sensibly about it, most of paid-for apps live on my iPad, while my phone just has the minimal day-to-day essentials. While no one could prise my iPad out of my cold dead hands, perhaps if I could replace the apps on my phone cheaply, I could jump over to the good ship Windows Phone?
Having a quick look through the Windows Store I was disappointed by the lack of banking apps, but the replacement for the Nation Rail app has beautiful imagery and intuitive features (£4.99, but free to trial for three days). I think the apps could be a big hurdle for Apple users to overcome, but if Windows devices like the Lumia take off, it won’t be long until every app developer is hurriedly coding for this OS.
Once I’ve put the Lumia properly through its paces, expect a blog post on the ease of switching over from Apple in the next couple of weeks.
The Lumia 920 will be available from the 2nd of November exclusively with a 4G contract on EE, while Phones 4u will stock the full colour range of both the Lumia 920 and 820. The Lumia 820, however, will also be available from early November at O2, Carphone Warehouse and Tesco Phone Shop.