Lockdown happened – and, consequently, a lot of people looked into the idea of finding a place to stay that would allow them some disconnection from the world and a place where they could work and live a bit more remotely.

One of the Inspect-a-Gadget elves did this, quite successfully. But even elves need secure web connectivity and (just occasionally) the chance to connect to home Internet banking services.

If you’re in a hotel with “pumped piped” WiFi, then there is really no secure option, usually – unless you have a WiFi “repeater”… so keep reading…

But if you’re in a rented apartment of some form with its own Internet pipe and dedicated router, you might be tempted to connect… but how much better if you had your own router with you?

About the size of three Kit-Kats stacked on top of each other  (19.2 x 15.6 x 5.2 cm), this is a way of not quite taking the web with you… but at least a way to take your personal gateway into the web with you.

Indeed, users can actually “repeat” public WiFi securely back to their own workspace, as explained in this video here.

At £59.90 on Amazon at the time of writing, the Beryl (possibly named after an ‘Auntie’, who knows?) can be connected to the web in 4-ways: Cable, Repeater, 3G/4G Modem and Tethering with user documentation to explain how here.

The unit has its own CPU, Type-C power supply, USB-A 3.0 port and 3 Gigabit Ethernet ports – it can support up to 40 wireless devices simultaneously, although that sounds like a push to be honest.

Beryl comes with dual-band WiFi with speeds up to 867Mbps for 5GHz WiFi and 400Mbps for 2.4GHz WiFi.

Beryl is the first router from GL.iNet with the latest version of the Internet Protocol (IP), adding an extra layer to cybersecurity. As with other GL.iNet products, Beryl supports 30+ OpenVPN and WireGuard VPN services. Also offering VPN speeds with 91Mbps on WireGuard and 21Mbps on OpenVPN respectively.

According to its makers, “Users’ online identity and browsing data could be concealed from surveillance and traffic analysis by using the Tor service. Cloudflare helps to prevent eavesdropping and manipulation of DNS data via man-in-the-middle attacks. Internet security can be strengthened by getting support on the latest DNS technologies from NextDNS. It supports WPA3 encryption which is the next generation of Wi-Fi security.”

Beryl uses the latest stable OpenWrt (19.07.4), an open-sourced operating system based on Linux. The root access allows the users to customise and optimise the devices to their specifications.

Overall then, Beryl is as pocket-friendly as it claims to be and is lightweight (184g).

So, once we’re all allowed to go on holiday again, this time you might be inviting Aunti Beryl with you… more info on how to set up Beryl as a secure ‘repeater’ router when traveling is presented in this video. 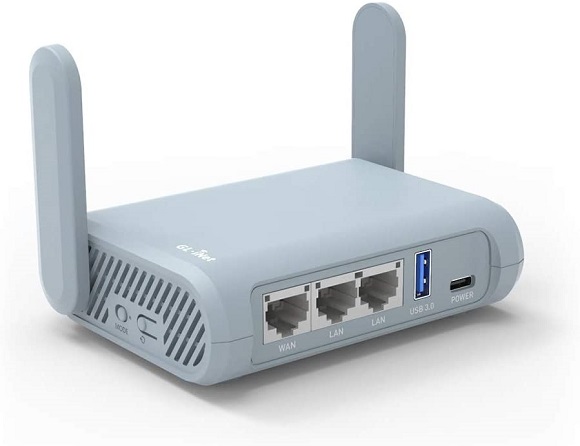