Put yourself back somewhere in between punch cards (pre-dating the 1970s and earlier) and onward to the proliferation of the (8-inch) floppy-disk and subsequently the 3 1⁄2-inch floppy disks that many of us came to know and love in the 1980s and 1990s.

This was a time when 1.44 megabytes seemed useful – and, if you teamed five or six together you could get a pretty good software suite (or at least application) installation off of them.

Of course the CD-ROM pushed us from 700, 800 and 900 megabytes close to a gigabyte, but this is still ancient history to today’s millennials, who were busy being born and learning to walk those two decades ago.

Since then we’ve all become used to USB ‘thumb drives’ or ‘sticks’, but the growth of the web meant that more and more data resources were downloaded online… and these units stopped being free giveaways after about 16 gigabytes anyway.

Some use of 64 gigabyte USB sticks happens, but for serious backup and muscle, you’re talking about investing in a terabyte drive… and although the best of them aren’t huge, most would fill up your whole pocket and then where would you put the casing and the cable and still have room for your smartphone and keys?

What if we could tell those old time computer operators that, by 2020, you could put 1 terabyte in your pocket on something the size (and let’s stay old school with this) a couple of ‘cigarillos’ or perhaps we should say a single fish finger?

The Aegis Secure Key 3.0 is (by lucky coincidence) almost exactly the same size as a fish finger and it can pack a full 1 terabyte in storage. Made by Apricorn, this disk comes in the following format sizes: 16 GB, 30 GB, 60 GB, 120 GB, 240 GB, 480 GB and the powerful 1 TB unit that we trialled for this story.

By way of an example, a complete history of all personal work files + 200 ‘ripped’ music CD album files + 100 ‘ripped’ movies + every digital photograph we (the Inspect-a-Gadget elf tasked with writing this review) have ever taken comes to 187 gigabytes… so just short of ⅕ of terabyte. We could get five versions of ourself on this device and still have room to download our complete Facebook history and plenty more besides.

But let’s talk about set up and usage first…

Inspect-a-Gadget knows there’s a password set up process to go through before the disk itself can be used. The one-sided A5 Quick Start guide takes the user through 7-simple steps for set-up in order to establish a numeric password on the device’s on-board keypad.

It’s a good idea to read through ALL the instructions before you start, but it is possible to set up the disk one step at a time… just one piece of advice, think about what your password number is going to be before you start and commit that to memory or keep it where you keep these things in a secure place (we won’t ask, we promise).

A nifty rubber seal gives the Apricorn Aegis Secure Key 3.0 (if not quite a waterproof to 200-metres performance level) what the company calls the ability to shrug off ‘sustained water immersion’ to protect it. Drop this (closed in its casing) disk in your washing up bowl or some chicken tikka masala and you’ll be fine, but ideally stop short of taking it snorkelling if at all possible. It is in fact IP68 (Ingress Protection) certified.

Apricorn describes the devices as ‘software-free’. This means that the device doesn’t ‘launch’ any software to work – and this means it will support any operating system that will mount a USB (usual of Windows/Linux/Mac but also embedded systems, vehicles, medical equipment etc.)

In addition, it doesn’t need a screen or keyboard to operate – and the on-board PIN pad means you never share your critical security information (i.e. password) with the computer you are plugged into.

According to Apricorn, “The security itself comes from a 100% hardware-based 256-bit AES XTS encrypted, onboard keypad PIN authenticated and ultra-fast USB 3.1 (3.0) data transfer speeds. All data is encrypted on the fly and the secure USB flash drive device’s PINs and data remain encrypted while the drive is at rest.”

The unit is completely cross-platform compatible and OS agnostic and so works on Windows, Linux, Mac, Android, Chrome, embedded systems and other equipment.

One proviso there, Apricorn’s cross-platform claims are 100% spot on and we moved between Mac & PC beautifully, but don’t necessarily expect to be able to use the disk with every television on the market, especially older one. TVs have a habit of formatting disks out of recognition for all other devices… but you’re not going to use it for that, you’re going to store your whole data life on it – the important bits – not eight catch-ups of Strictly Come Bake Off, right?

All internal componentry is protected from physical tampering with a layer of hardened epoxy and the firmware is locked down, making it immune to malware attacks such as BadUSB.

These devices do warm up – they’re supposed to and they have to, they’re doing a lot of work in terms of data transfer, Apricorn EMEA managing director Jon Fielding explains the exact situation.

“Our USB devices are not able to dissipate heat in the usual way computing equipment does i.e. with an internal fan. So, we deliberately use the device casing as a heat sink. On the Aegis Secure Key 3.0 we also ridge the casing to provide a greater surface area across which to dissipate the heat. Therefore, the increased heat is by design and stays within acceptable boundaries so as to never damage the internal electronics or cause any external harm,” said Fielding.

In terms of device locking/lock-out, Fielding further explains that there are many configurable policy items in the unified feature set across all of his firm’s devices.

“One is unattended auto-lock (default is set to “OFF”) which, if turned “ON”, can be set to 5, 10 or 20 minutes, locking the device after that period of inactivity. If a user has auto-lock “OFF” and the device is logging out/suspending, it is likely to be a computer BIOS setting that locks USB storage devices independently to reduce power consumption,” explained Fielding.

Apricorn has also built in a unified feature set, which allows organisations to create their own policy profiles for device usage and apply them to the devices. This can be done via the PIN pad device by device or (more likely in enterprise use case scenarios) through a Windows-based interface (Apricorn’s own software) that allows profiles to be applied to multiple devices at the click of a button.

In summary, it’s actually quite mind-blowing to hold so much data power on something so small… for independent (freelance and other) workers in the time of Covid-19 do we really need to say more? Apricorn offers a number of encrypted portable, desktop and flash drives, including its latest USB-C device with up to 128 gigabyte for connection to mobile devices. 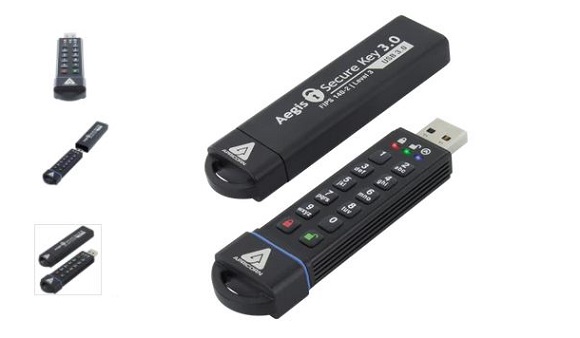