We’re all aware of the famous New Yorker cartoon – “on the Internet, nobody knows you’re a dog”. However, that’s about to come to an end if the latest application of the Regulation of Investigatory Powers Act (RIPA) comes to pass. 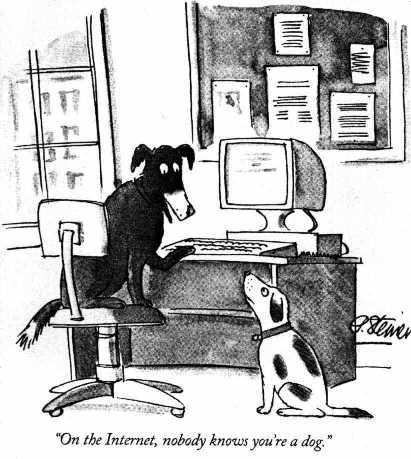 Under new plans, police will be granted powers to hack into personal computers without needing a warrant. And yes, this is as a result of everyone’s favourite piece of legislation, the Regulation of Investigatory Powers Act (RIPA) – that same law that has been misused by local authorities to video dog owners to confirm that they are clearing up after their pets. In this particular case, it is suggested that the police might use open wi-fi connections or targetted malware to gain access to suspects’ PCs. The Association of Chief Police Officers insist that “safeguards are in place to ensure the powers are used only in suitable situations”.

Of course the ‘nothing to hide, nothing to fear’ argument will be applied here to try to disguise the threat to civil liberties, but how many of us would feel comfortable about a police officer entering our houses and photocopying all our paperwork, just to see if there is anything incriminating in there? That officer would be copying bank statements, intimate correspondence, family photos, and taking those copies away. The officer would feel duty bound to retain those copies as evidence just in case of a challenge against that intrusion. Sooner or later, those copies would probably be stored in a machine-searchable form. In other words, any authorised police officer would then have access to our personal documents. Does that seem a little disproportionate to anyone, or is it just me?

I worry about the potential for this sort of unregulated approach to lead to ‘arbitrary’ use of such powers. For example, most of us are inclined to believe accusations that from time to time police forces apply their powers arbitrarily to meet quotas, such as having a purge on speeding motorists that is abandoned as soon as the targets are met. So what’s to stop a police force driving down streets hacking home wi-fi networks to see if anything interesting pops up?

Even more disturbing is the possibility that this use of RIPA might follow the pattern of other uses, and that within a few years we’ll see local councils hacking into home PCs to confirm whether the family is entitled to catchment for a local school, or to check benefits entitlement, or to see if they’re really the owner of that dog. RIPA has finally been applied in a way that will arbitrarily strip us of our right to privacy in the home (something that is enshrined in Human Rights law) – and now on the Internet, any public authority can find out if you’re a dog.