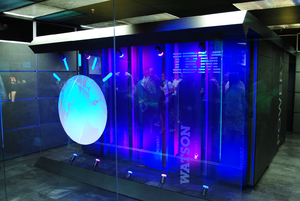 IBM has been working hard to make its supercomputer Watson a friendlier, more affable kind of machine, but little did the supposedly extremely intelligent engineers know about how it would repay them.

Watson – which won the US game show jeopardy against human champions after being able to scan and retain data from 200 million internet pages – was not just taught info from Wikipedia, but also the contents of website Urban Dictionary.

IBM hoped this would make its interactions more human, helping the lonely little machine make friends and connect with the public more.

However, all it did was bring out Watson’s vicious streak as it couldn’t resist using the obscenities it found within the pages of the renowned website.

The machine began answering researcher’s questions with one word – bullshit. Now, IBM’s competitors might like to talk to them like that but we could imagine the creators felt they had given life to an ungrateful monster rather than an amusing wit.

Alas there seemed no way to fix the problem and Watson had a ‘Men in Black’ pulled on it, wiping the memory associated with Urban Dictionary.

What a shame, Big Blue could have used some character in its ranks…