A free crowdsourcing app, Facewatch, has launched for the citizens of Surrey. Despite the name, it isn’t Facebook’s more evident stalking sister site, but an app that was originally launched by the MET in April to help convict suspects of the London riots.

The app, which encourages users to search through images and anonymously identify anyone they recognised, is now being used by Surrey Police to crack down on crime. 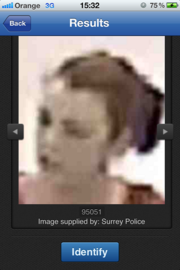 Citizens with a sense of civic duty can download the app to sift through the photographs if you have an iPhone, Android or BlackBerry smartphone – no neighbourhood watch patrols for the Windows community then.

Out of curiosity, Downtime downloaded the app and entered a random Surrey postcode. We were immediately faced with three faces to identify, one of which was so blurred that we doubt the person’s own mother would be unable to identify them.

Is this the answer to burning questions at local neighbourhood watch meetings? Or perhaps it’s more suited to aid the masked and caped vigilantes, sworn to protect Gotham City… err, I mean Guildford.