Global self-publicist – sorry, “internationally renowned performance artist and master magician” – David Blaine, is following up his past stunts of being encased in ice and hanging in a box near Tower Bridge with an inspiration for every worker whose laptop has run out of juice when you can’t find a power point.

According to the hyperbolic official announcement: “Blaine will stand on a 20-foot-high platform at Hudson River Park Pier 54 in New York, surrounded by seven towering metallic orbs – or tesla coils – that will stream one million volts of electricity around him for three days and three nights. Clad in a custom-made metal suit and helmet capable of conducting millions of volts of electricity, Blaine will be on his feet and will not sleep or eat for the duration of the performance.”

But perhaps the most remarkable aspect of this stunt is that it is sponsored by Intel and “enabled by an Intel-inspired Ultrabook”.

We all understand the frustrations of losing hours of work on an important Powerpoint presentation because you run out of battery on your laptop, It is selfless of Blaine to demonstrate that the obvious solution is simply to send a million volts through your body, and stick one finger into your Ultrabook power socket, and never again will you be left cursing the hopeless battery life of portable devices. Even if you might need to learn to craft Powerpoints one-handed.

Downtime salutes Blaine as the new hero of road warriors everywhere, and we look forward to his next stunt being sponsored by the iPhone 6. 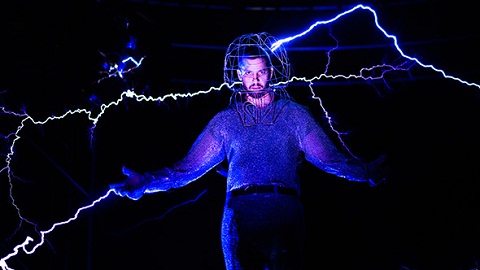