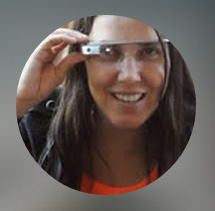 Cecilia Abadie (pictured left), a Google Glass beta tester based in San Diego, has escaped a traffic ticket, after her case was dropped by court in California.

Abadie was pulled over by a US traffic cop for doing 80mph in a 65mph zone, was charged for breaking a California law barring motorists from watching TV while driving because she was wearing Google Glass while in control of her vehicle.
Her lawyer argued the device was not switched on and Commissioner John Blair ruled that Badie was not guilty because the traffic officer could not prove  that the device was in operation. Perhaps wearing Google Glass makes you drive faster, even if it’s not switched  on.

Google recommends: “D on’t hurt yourself or others by failing to pay attention to the road.”
SearchCIO
SearchSecurity
SearchNetworking
SearchDataCenter
SearchDataManagement
Close