People are blaming a smartphone for the riots in London. Forget a lack of opportunities for millions of underprivileged people, or the pure idiocy.

A survey in the Daily Mail even reveals that 57% of readers think the Blackberry Messenger should be banned. Well it is much easier than increasing opportunities for the masses I suppose.

Soon people will be blaming the internet for future riots, which will happen when the current rioters’  lives get even worse when food dries up as well as the opportunities.

Well that’s if one of the latest e-petitions becomes law.

The e-petition is: Convicted London rioters should loose [sic] all benefits.

The e-petition says: “Any persons convicted of criminal acts during the current London riots should have all financial benefits removed. No tax payer should have to contribute to those who have destroyed property, stolen from their community and shown a disregard for the country that provides for them.” 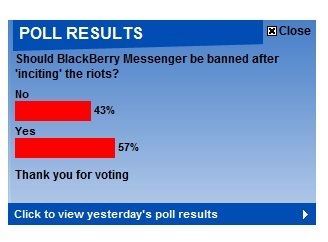