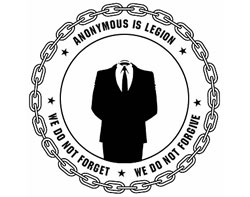 Hacktivist group Anonymous is perhaps best known for punitive actions undertaken on behalf of others such Wikileaks, but now it is taking up “arms” on its own behalf.

A French company snuck one over Anonymous by trademarking the group’s logo and slogan, but the move “will not go unpunished”, the hacktivists have said.

Paris-based Early Flicker registered the logo of a headless suited figure for use in France as well as the slogan: “We are Anonymous, We do not forgive, We do not forget. Expect us.”

In a YouTube video, Anonymous said it “will take down any business they have going on the internet”, according to the BBC.

Downtime has to admire Early Flicker’s courage, but for a company that does business online, Anonymous was perhaps not the wisest target, especially considering the group’s track record of disrupting websites with co-ordinated distributed denial-of-service (DDoS)attacks.

Attention all suppliers of DDoS mitigation systems: Early Flicker just may be looking to buy.