People complain about Google Street View all the time. Many see it as an invasion of their privacy. But downtime doesn’t agree. In fact it believes Street View’s discovery of a species of half man, half pigeon creatures should be applauded.

I mean this week astronomers have been heavily praised for discovering three planets  in another solar system that can sustain life. But poor old Google is constantly slagged off. Who cares about it being clever with its taxes when it discovers the existence of a cross between humans and Pigeons? 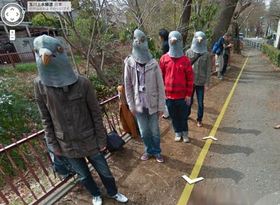