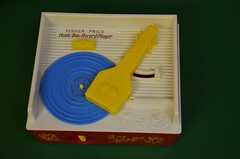 Any kid who was anyone had one of the Fisher Price record players built in the 1970s. With a quick wind-up, you could choose from your array of vinyls – ok, plastics – and blast out – ok, churn out – such classics as Twinkle Twinkle Little Star or Frere Jacques.

As the ghetto blaster became dominant and cheap enough to buy for children to mess about with during the 1980s, the Fisher Price toy was put in the loft and never seen again… until now.

The new technology on the block, 3D printing, has breathed life into the old toy and enabled an inventor to find a way to create new records for the machine.

Fred27 has created software which picks out the relevant notes for a simplified version of your favourite tunes and works out what pin points need to be on a record for the player to pick it up.

He is offering it as a free download but you will need to invest in the 3D printer to be able to make your dream records become a reality.

Having just saved one of these record players from the hands of parents moving house and binning all the kids’ toys, this is definitely an investment Downtime is willing to make.

Now, what first, Metallica or Slayer?