This is a Powerpoint slide I’ve used a lot lately when I’ve been asked to give talks on the state of IT or “the next big thing”, and it usually seems to raise a smile from the audience: 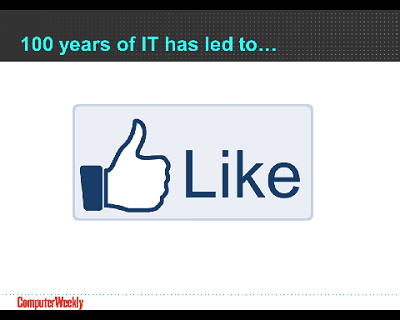 The aim of the slide is to demonstrate to the audience – typically IT leaders – how the game has changed, and that user expectations of corporate IT are now set by consumer-oriented services such as Facebook.

I was interested, therefore, to read this article by Walter Adamson, a US “social media strategist”:

Lessons for Enterprise from Facebook and its 1 billion users

If your CEO or CFO (or perhaps increasingly these days, your marketing director) questions the value and cost of IT at your organisation, it’s likely they will draw comparisons with the likes of Facebook. One billion users, almost no downtime, with an approximate running cost of $1 per active user? Why can’t we do that?

And of course, we in IT know that behind that Like button there is an enormous complexity of software, networks and datacentres. We know that the challenges of delivering hundreds of diverse business applications is different. But not so many IT leaders want to admit that there are lessons to be learned from the likes (pun unintended) of Facebook in how to run corporate IT.

The problem is in the IT supply chain, which over the years has evolved to a point where the  basic commodity that passes through that supply chain is complexity.

A supply chain, at its simplest, is something that takes a basic commodity and passes it through a series of processes and organisations until enough value has been added to sell it to an end consumer for a profit.

In IT, that basic commodity is complexity.

Unfortunately, IT departments just take that commodity, and add process to it. So, when the business manager comes to the IT manager and explains his or her need, the IT manager says, “Ooh, that’s complicated.”

But today, the business user can reject the complexity, and ignore the IT department that says “no”, and go to the cloud, or point to the websites that are based on open source and commodity cloud services that support millions of users with no front-end of complexity.

As Adamson puts it in his article: “I am sure that there are all sorts of nuances, all sorts of reasons why ‘we’re different’, ‘we’re more complicated’ etc etc but for all intents and purposes Facebook stays up globally for 1 billion customers while very expensive dedicated enterprise systems in a single country serving a minute fraction of users don’t stay up.”

These are the questions that IT leaders will have to face – and if you aren’t already, you will soon.

IT leaders know that the biggest challenge they face in their IT delivery is complexity – that history of poorly integrated, incompatible legacy systems that somehow grew organically over 10 or 20 years. It’s the reason the banks have such a huge IT problem and why online banking and ATM systems seem to crash so much more often – constantly bolting more complexity onto an already over-complex, sprawling legacy infrastructure.

IT leaders want to simplify things, to make upgrades easier and technology more agile and flexible.

But it’s going to take a bold CIO to say, we need to start from scratch, we need to learn from how a Facebook or a Twitter or a Google has created enormous IT infrastructures from nothing. But they need to acknowledge that corporate IT departments no longer have the only nor the best way to approach large-scale IT systems, and that there are lessons they can learn.

And those CIOs need to say the same thing to their suppliers, who need to learn that CIOs are no longer delivering IT systems, they are delivering business outcomes, and an annual licence fee with monthly maintenance payment does not deliver a business outcome.

I believe that most CIOs get this. I don’t believe many traditional IT suppliers do. And there are problems ahead for corporate IT until that dichotomy is resolved.