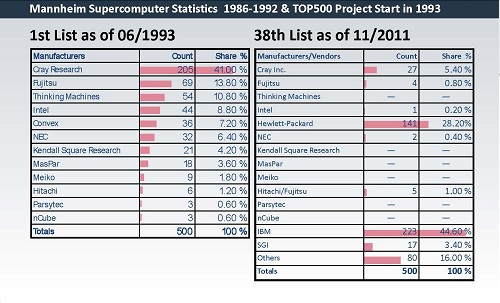 A decade ago, Cray Research was the undisputed leader in supercomputers with over 40% of the market for top performing machines. Today, that honour belongs to IBM (44%) closely followed by Hewlett Packard (28%).

Some of the early leaders have not kept pace. Fujitsu, for example, which claimed 69 of the fastest performing supercomputers in 1993 could only boast 4 top performing machines in 2011.

And many of the early pioneers did not survive the downturn in the supercomputer market in the mid 1990s. Thinking Machines, which had 10% of the market, filed for bankruptcy, while Kendall Square Research, was delisted from the stock exchange.  MasPar, ceased production of hardware to focus on data mining software, while nCube was acquired by another company in 2005. Parsytec, and Meiko Scientific, well known in their day, have also disappeared from the scene.