Is Microsoft about to welcome back the start button?

Windows 9 ‘Threshold’ is said to be about to preview at the company’s annual developer convention Build 2014 in April.

Don’t get too excited, nothing is official and if you use Windows 8 properly you don’t actually need the start button — see Did Microsoft get it right with the Start button after all?

A special sneak peak preview for developers will put some colour onto this iteration of the operating system which is thought to be known as Windows ‘Threshold’ at this stage.

Due for ultimate release sometime in 2015, Windows 9 will represent the first major release of Windows under the purview of Terry Myerson who now holds the position of operating systems group vice president (he used to lead Windows Phone) today.

WindowsForum.com says: BLOG: Windows 9 due in April 2015, but coding hasn't started yet

The intriguingly named ‘Threshold’ is a wider initiative in that it should involve updates to all three OS platforms i.e. Xbox One, Windows and Windows Phone. As many readers will know, Windows 9 Threshold has actually derived and drawn its name from the fictional universe in the Halo video game series.

Developers will not get a pre-alpha release of Windows 9 (or any other form of release) as development is thought to not actually have officially commenced at this time.

Windows 8.1 at a turtle’s pace

We say again, don’t get to excited, TechTarget’s Diana Hwang comments, “Microsoft is expected to show off a roadmap for its Windows 9 client operating system this spring, but it’s unlikely to excite most IT shops, given their lacklustre embrace of Microsoft’s currently shipping OS, Windows 8.1.

Hwang goes on to say that enterprises continue to adopt Windows 8.1 at a turtle’s pace, since many IT shops have only recently migrated to Windows 7. Some even remain on Windows XP. Others have simply tested Windows 8.1 but have not committed to this release.

Like we say, don’t get too excited yet … apart from maybe one thing.

Conceptual designer and UX/UI & branding architect Jay Machalani @technofou has produced the below representation of what Windows 9 “should and could” maybe look like. 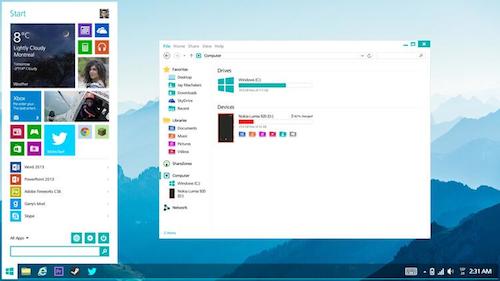