In 1817, Robert Owen, founder of the eight-hour movement in the UK, coined the slogan: ‘Eight hours labour, eight hours recreation, eight hours rest’ in order to regulate the hours that factory employees were subjected to. 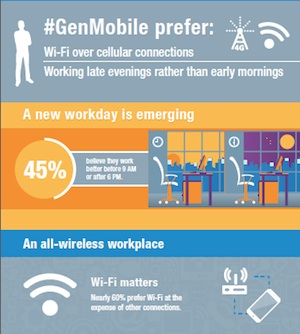 That was 200 years ago. In the course of two centuries, our attitudes to work and that place we call the “office” haven’t ostensibly changed, until now. Things have changed… and we know that mobile, wireless, cloud and device innovation are all responsible. **#GenMobile** In a new report released in line with its [email protected] EMEA Atmosphere conference, wireless networking specialist Aruba Networks suggests that the change might be bigger than we have so far realised. “In the near future the term ‘office’ will be obsolete and the drab surroundings we associate with the executive life will be erased as a new model for work emerges,” states the firm’s Workplace Futures report, produced in association with industry think tank The Future Laboratory. **Future + workplace** Those two words are important i.e. “future + workplace” and there are already conferences, blogs, white papers, newspaper columns and promotional T-shirts devoted to evangelising the movement towards new work practices. Aruba says that this new world will be an “All Wireless Workplace”. [As already reported on Computer Weekly](https://www.computerweekly.com/feature/Aruba-Airheads-Generation-mobile-forces-Wi-Fi-rethink), Aruba CEO Dominic Orr has spoken about the “third place” as he called it i.e. an area he defined as neither home nor business, but where work is still done. What started off as clunky 11 kilo bag of luggage at the start of the 1980s (yes, we are referring to [the Osborne 1](https://en.wikipedia.org/wiki/Osborne_1)) heralded the start of 30-plus years of innovation, miniaturisation, product-isation and of course advancement in processing performance and related developments in screen capabilities, memory, connectivity etc. **Eight hours is now 20-seconds** 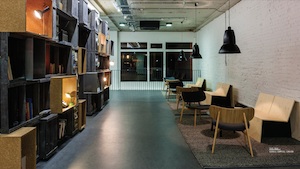 Our new mobile device usage patterns have been widely documented. The Aruba CEO is of the opinion that we now longer work in eight-hour chunks, but 15 to 20 second “segments” instead — and it is entertaining to analyse how the work/life balance is blending and changing as a result. People work at home, on the go, when they are waking up and when they are on aircraft journeys and these are all areas when we would have previously been unable to carry out productive work tasks. Interestingly, this is a large part of the reason why firms are like Google, Adobe, Rackspace and others are designing their offices to resemble home and leisure spaces. The office really is becoming obsolete. **The buzzphrase here is “Bleisure”** i.e. business + leisure. You either think that’s a handy new term or you feel bilious, it’s one of the two. According to Aruba’s report, architects of the Bleisure revolution now use terms such as ‘serendipity corners’ and ‘chance-encounter corridors’ to describe the subtle social engineering they are employing, as laptops, mobiles and tetherless (Ed- is that a word yet?) working allow people to move more freely within a building. **So if these are the trends, then what are the implications for:** 1. network management engineers, 2. software application developers, 3. cloud services management DevOps and, 4. the rest of IT function that sits at the back end? Aruba doesn’t just think the office is obsolete, it think that traditional enterprise networks need to be transformed into more intelligent systems in their own right and this is what its mobile-defined network solution seeks to achieve. A mobility firewall employs advanced deep packet inspection and this opens the door to providing more granular policies, service quality and control. Essentially then, Aruba Mobility-Defined Networks is a software architecture to network “highly mobile” employees, or indeed consumer customers. **What this means for apps** Software application developers targeting these new environments should be aware of the fact that, at the back end, there is added network intelligence for an automated self-adjusting infrastructure. When the cloud developer wants to consider how much always-on connectivity he or she can tap into, the suggestion here is that, at the back end, changes in wireless state and usage patterns (among all devices in the network) trigger security actions and performance optimisation measures so that the infrastructure adapts to its environment. Unlike traditional static Wi-Fi networks, Aruba Mobility-Defined Networks eliminate the need for IT professionals to make manual changes to accommodate new mobile devices and applications says the firm. The firm’s own ClearPass Exchange is designed with a set of common language Application Programming Interfaces (APIs) and data feeds that allow it to automate workflows with “almost any third-party IT and business system” from Aruba partners inlcuding IBM, AirWatch and MobileIron. “For example, a network policy violation will prompt ClearPass to trigger a push notification to the device in question through the Mobile Device Management (MDM) system. ClearPass integrates with the helpdesk systems to then automatically generate a ticket notifying security teams,” said the company. **Time to “rightsize”** What the company is doing here is trying to give us tools that will help to “rightsize” the network so that can perform best for a more dynamic group of users on the (mobile) move. If the office is indeed obsolete, then we need the non self-optimising networking infrastructure to be positively prehistoric.