This blog is written live at the 8th annual Tableau Conference — the firm is known for its ‘mission’ to reinvent the spreadsheet for the tablet age… in terms of operation, Tableau’s software takes data held in Excel spreadsheets and converts the information into tactile/touch-based “data visualisations” with Business Intelligence (BI) functionality. 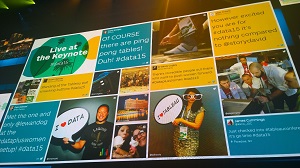 Huge simply doesn’t cover it; they say that there are 10,000 attendees here and most of them have the #data15 hashtag already memorised for the week.

Co-founder and CEO Christian Chabot kicked off this year’s event with all the usual fanfare of a company chief taking the stage in Vegas.

Chabot insists that his firm is dedicated to helping people to understand data — and the most important word in that sentence is ‘people’ (well, this is Las Vegas remember).

Data visualisation examples of the kind created by the firm’s software are clearly applicable to every industry and vertical (or sub-vertical) on the planet.

• Manta-ray protection in the ocean

What data means in the real world

“Compiling and reflecting on data and being able to understand it is starting to really impact people’s lives,” said Chabot. 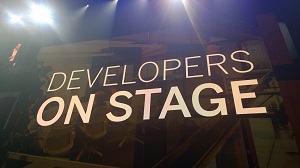 Data is no longer the exclusive realm of statisticians and mathematicians says Tableau.

The problem, if there is one, is that the opportunities to use data are expanding faster than the growth of skills to use it argues the firm – an obvious, but nonetheless valid ‘tee up’ to position the Tableau product set.

Francios Ajenstat from the Tableau product development team took the stage to explain his vision for how ALL users should be able to use what he calls ‘self-service’ analytics.

Developers on stage – this section of the keynote saw seven of the firm’s actual programming team present and show an actual migration of spreadsheet information from Microsoft Excel into a Tableau visualisation.

Even for a spreadsheet that has been displaced into two sections, the software is capable of taking the information and converting it.

Another common problem experienced when ‘parsing a string of data’ into a visualisation tool is data format and the team say they have found over 250 different data formats in use today – this again is one of the key pieces of operational intelligence that Tableau is capable of performing. 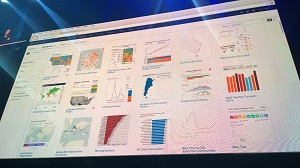 Another key feature just introduced is the ability to integrate cross-database data. If a user is inside one SQLserver database (for example) and needs to connect to a new data source (image say customer data is in one database and product data is in another) – the software now has the power to automatically join these kinds of data streams.

As a final comment on this opening session, this conference is not what you would expect. If you thought that this would be a generally quite high-level presentation aimed at data visualisation for dummies – then you would be wrong.

The Tableau developer team took a major portion of this keynote and spent a weighty proportion of the time on stage showing off real application usage scenarios.

If you thought that data visualisation was a dry accounts-type subject, the you’d be wrong as well.

The user attendee (non Tableau employee) sat immediately to my right in the conference hall spent the entire presentation clenching her fists, whooping and saying “yes, yes, oh yes!” every time a new piece of functionality was shown.

The stuff really gets people going, it’s almost like people aren’t ever going to want to use Excel on its own anymore.

As they say at Tableau: viz long and prosper.