… but now (as of Build 2015 especially) Microsoft says that Office is a platform.

Integration into other applications

Last year we explained here how Outlook will now have wider integration into other applications.

Examples include integration to apps like LinkedIn to show a ‘power email user’ who all the people that they are getting mail from without having to open LinkedIn.

There are also integrations in Outlook to Salesforce to help build business processes into the communications infrastructure of Outlook. An Uber ‘ride reminder’ can connect with the calendaring function in Outlook too… and so on.

“Applications that you build will now be capable of ‘showing up’ throughout Office so that they do more than any single application on their own,” said Microsoft’s Nadella.

• Enhancements to the Microsoft Graph that can be used to build smarter business solutions.

• Improvements to the add-in model, including support for Office for Mac 2016.

• Centralised deployment and programmatic creation of solution-specific ribbons and buttons; and new extensibility features for Skype and Office 365 Groups.

NOTE: In addition, Microsoft claims that it is making applications that consume Office data more responsive by providing notifications through Microsoft Graph for changes to users’ mail, calendar and contacts.

“This means businesses can leverage familiar experiences to collaborate on and interact with data from these external services. We also announced that we will be bringing Office 365 Connectors to the Outlook inbox soon. Zendesk has built an Office 365 Groups connector that allows different departments working in Zendesk to easily escalate tickets to groups in Office 365. Colleagues can then collaborate on the ticket together to resolve the issue,” said Koenigsbauer.

In addition to the Office extensibility enhancements, Microsoft has also demonstrated two prototypes of future Office inking experiences designed to make pen and ink a primary input across the Office apps.

One example used upcoming Windows capabilities for simultaneous touch and pen use, showing the ability to draw lines with a digital pen and line up objects against a ruler in PowerPoint that could be actively positioned with two fingers.

Microsoft is committed to building out Office as a platform alongside it’s other platforms i.e. the Azure cloud service and the Windows operating system platform — extended commentary is available here describing Satya Nadella’s description of ‘convesations’ as the firm’s fourth platform. 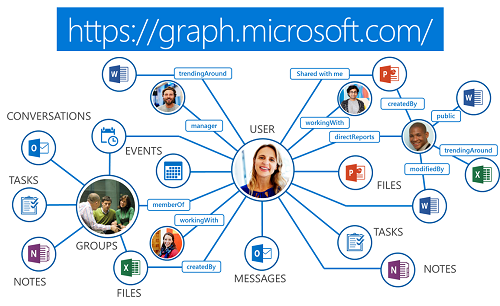