If you’ve been following the news for Oracle OpenWorld and JavaOne 2010 so far you’ll have seen a whole heap of products unveiled. The company has quite literally carpet-bombed the newswires with some pretty meaty announcements. There is therefore, I hope, room for some slightly more tangential comments as to the look and feel of the show.

Larry Ellison himself used the first keynote (unusually hosted on a Sunday night) of this event to detail his all-singing, all dancing integrated hardware and software box — the Exalogic Elastic Cloud. The concept behind this product being that it is all the hardware, middleware, processing power and software needed to create a cloud infrastructure.

Under the new tagline ‘Hardware and Software Engineered to work Together’, Oracle is rolling out what it claims to be a total cloud solution – but is it simply, as some commentators have suggested, nothing more than an ‘intelligent server’?

Is this announcement no more than “Cloudwashing” i.e. putting the term “cloud” in front of some otherwise standard piece of kit – or it is true innovation?

Could this really be the cloud in a box – delivered? 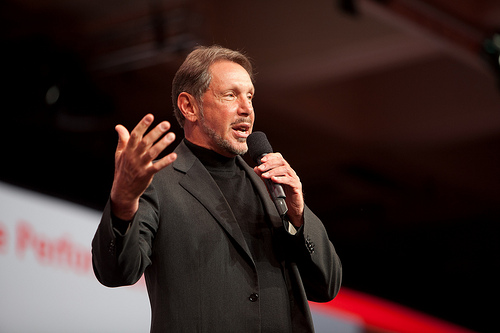 Looking at the hardware on offer here. We can see how Larry defines the cloud.

“The whole idea of cloud computing is to have a pool of resouces that is shared by lots of different applications within your company – at end of month accounts, the resouces are directed towards the finance department, when it’s time for a sales drive, a different department gets what they need and releases the power that they don’t need,” said Ellison.

If the Exalogic Elastic Compute Cloud is indeed a cloud in box, then this is what it takes to build one:

… and the secret sauce? Well, that’s the “coherence software” that conjoins the memories in all of the servers so that they appear as one complete unit.

OK so every tech vendor worth its salt has their own spin on what cloud computing really is – and Larry clearly had a riot of a good time running down the efforts of Salesforce.com and Red Hat as he specified that Oracle’s defininition of the cloud – if he ABSOLUTELY HAD to pick another company – it is probably the Amazon (EC2) – elastic cloud 2.

For Larry, the cloud must be a “platform” upon which you build other applications, which includes both hardware and software and it’s all standards based – and the on demand element is especially impotant here, so much so that Amazon put the term ELASTIC into the term itself (which Larry actually quite likes) – after all it was Amazon that really popularised the term.

Is your head still in the clouds? Spare a thought for the attendees that had to sit through a 10 minute gung-ho boys at sea video of Larry winning the America’s Cup in his massive sailing catamaran.

Tonight, all the UK press are going out for a few beers with him while he asks us to tell us what we like most about open source computing and the community contribution model of software application development before we head on out for burgers.

OK – so that last bit didn’t happen, but all the above did!