So the question is, what is a technology conference keynote without a pithy takeaway catchphrase or analogy?

So then, IBM started its Information On Demand symposium this week in Las Vegas with an intro delivered by Jake Porlow (apparently he has a show on the National Geographic channel but no, I’ve never heard of him either) who said the following:

Data is like oil… and there is a new rush to mine the flow of data.

Take that idea further if you like, data in the new CRUDE oil if we consider that data is now big data i.e. there is a huge amount of raw data/oil out there that needs mining, refining, treating and onward transportation before we can do anything with it.

In the 21st Century – big data is sexy

If you want more takeway soundbites… The Harvard Business Review apparently ran an article on how data scientists are the sexiest coolest people in the IT industry — Data Scientist: The Sexiest Job of the 21st Century

Man: “Hello wife, I have just completed an analysis of a huge unstructured data stream emanating from a post-relational big data database connected to an Internet of Things style sensor-based data creation and capture unit attached to an industrial turbine in a petrochemicals factory in Southern Sudan.”

Hmmm, maybe the Harvard Business Review wanted to get the word “sexy” into a headline, what do you think?

The problem with big data

But it’s not all roses, whiz-bang keynotes and cheesy soundbites. The real problem is that CIOs don’t know where they should be directing individual software application developers (and teams) to start to actually “engineer in” big data analytics products.

IBM’s forthcoming product announcements related to this show are obviously aimed at addressing this issue and “packaging” data analytics – look for news on the BLU Acceleration portfolio here.

Things are turning for the positive though says IBM and companies are now actually starting to appoint Chief Data Officers. So would that be CDOs? Yes it would.

Ray Wang of Constellation Research says that we’re moving from the point of having data storage to new “data decisions” inside the new world of data visionaries. 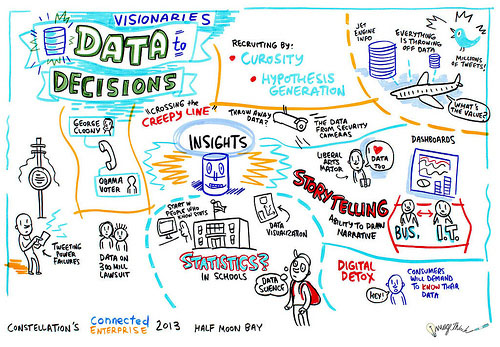 Big data and The Matrix

Advanced predictive analytics is like the freeze frame movie effect used in The Matrix movie.

When the camera freezes and pans around the scene our mind starts to take in extra information about the scenario being played out and, as we see more and more, we start to make predictions about what will happen next. This analogy goes some way to explaining why we need to try and “stop data” for analysis. Of course we can not actually stop data as it flows continuously in the real world, so instead we need to be able to perform this analytics in real-time instead.

There is more news here in terms of product-related announcements, so hopefully this diversion with whet your appetite for more big data analytics.