It’s all very well for a CEO to stand up on stage and say that today we exist in a so-called “application centric” world — it’s good stock standard fodder for any keynote to say this kind of thing after all.

But Gregoire had some substance to back this statement up as he comes from a career history working at PeopleSoft and others.

Perhaps 15 years or so ago we were focused on custom application development, but after this period the drive to this model of software was lessened…

… this is because we saw the rise of wide scale ERP software and a push from vendors to adopt these meaty packages of software.

But mobile, BYOD and ubiquitous web connection to cloud happened in the last decade and this shook up the way we all started to regard custom built enterprise applications again.

NOTE: Every knowledge worker now has an average of 3.3 connected devices today.

So then, at this point, the true birth of the “application centred” world came about… and we continue to see the application landscape change now evolve in this direction.

This train of thought was augmented colourfully by the next speaker at this event – Tom Standage, digital editor at The Economist reminded us that Wired magazine used to have a column called Japanese Schoolgirl Watch (which obviously sounds a bit dodgy)… which was in fact purely devoted to looking at what gadgets Japanese schoolgirls were using on a day to day basis.

The theory being that what technology the average Harajuku girl is using today, we will all be using in the West in 10 years time.

He also said that thinking MOBILE FIRST is of course important, or at least NOT MOBILE SECOND might at least be more realistic.

On both points above, we again see that the application evolution curve is shifting.

Major influences being (once again)…mobile, social and cloud — and now with cloud we also see a tipping point i.e. for the first time the top reason listed for cloud concerns is no longer security; as more cloud is actually now deployed, security concerns are reducing… security concerns are now in fact equally sat next to complexity concerns.

The old term “groupware” never really got it right did it? But Facebook has successfully pulled off this model so we must look to consumers to see where our next usage models will take us. The consumerisaton of IT is really really this real.

So how should we consider new technologies and the wave of current development if it’s not through studying the user adoption habits of Japanese schoolgirls?

How to understand the future

Standage also quoted the writer William Gibson who said: “The future is already here, it is just unevenly distributed.”

The point being that we can already see fragments of the future laid out before us, its just that they are not all fully developed, adopted or embraced as yet.

Standage’s next book — Writing on the Wall: Social Media – The First 2000 Years

talks about the way we used to witness social interaction in the old coffee houses of London, which used to be subject and/or culturally specific. Today we have Facebook, so nothing changes that much.

What this means for developers…

In break out interviews with the Computer Weekly Developer Network CA’s Shridhar Mittal explained that there are deeper changes afoot to enterprise applications which are manifesting themselves at the programmer level.

As CA’s DevOps lead, Mittal explains that today’s world is all about composite applications i.e. user credit card checks inside applications can be used inside various different apps, so why reinvent them when you can make them composite elements in their own right?

So onward, the lifecycle inside composite app structures should be also be different i,e, faster in this scenario, well – theoretically at least.

But the problem is that the impact upstream and downstream on other components can be disruptive unless tested properly and adherence to standards based technologies will indeed mean that these components do work with each other… but that doesn’t guarantee that the resultant apps will meet the required business function.

Mittal also asserts that the DevOps gap needs some cultural and technical evolution.

Operations workers naturally feel ownership not of apps, but of the infrastructure he says.

Also, Agile software application development needs to be able to test individual components before they go into production – think about an aircraft wing being tested in a wind tunnel before being attached to the plane itself i.e. we don’t just throw the whole plane together and see if it flies.

CA has Production Data Mining technologies (including the Pathfinder product) to bring forward real data into the test environment as well as performance characteristics of the application in the face of the data in question… plus performance of the data itself (such as how often it is updated). 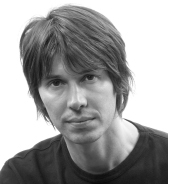 CA rounded out this event with a presentation by everyone’s favourite particle physicist Professor Brian Cox with his talk entitled Disruptive Ideas In Science — stirring stuff and, thankfully, not a Japanese schoolgirl in sight.