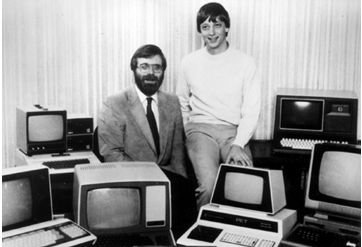 Microsoft's success began when IBM executives asked Bill Gates and Paul Allen to provide an operating system for their new baby computer, Project Chess - the IBM PC.  This led to Microsoft's DOS (disk operating system) and Basic programming language shipping with new IBM PCs. When Apple showed in 1984 how a GUI was far better than the command line user interface in Dos, Microsoft needed to get its rival GUI released, but this project was beset by technical problems and delays. IBM did not want Microsoft's Windows GUI and eventually decided to end its partnership with the software company, going its own way with the OS/2 operating system, which it released in 1987 to run on a new range of PS/2 PCs.