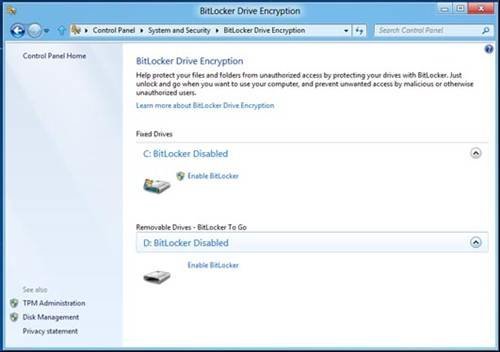 Bitlocker, a Windows feature for encrypting drives, now supports hardware encryption, improving performance on drives that support this feature. It is also smarter about encrypting drive sectors incrementally as they are filled. Another security feature, called Windows To Go, lets you boot Windows from a USB storage device so that when you log off, you can remove the device and leave no trace of your data on the machine. There are also changes in Windows security. Antimalware loads earlier in the boot process, and a feature called Secured Boot authenticates boot components. If TPM (Trusted Platform Module) is available, there is further validation of the boot process based on data stored in the TPM chip.