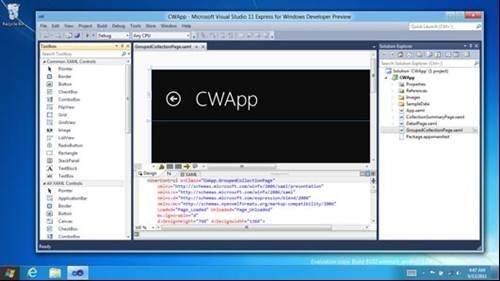 Microsoft has caused consternation among developers by shifting the focus of Windows development to a new model, though existing development techniques still work. The Metro-style user interface is built on a new set of APIs (application programming interfaces) called Windows Runtime or WinRT. Along with new Metro-specific APIs, WinRT supports some but not all existing COM and .NET APIs. There are several ways to code for WinRT. One is to use C++, C# or VB for the code, and to define the layout using XAML, the same language used to define a layout in Silverlight or Windows Presentation Foundation. The other is to use HTML and CSS to define the layout, and to code in JavaScript. The reason developers have found this troubling is that up until now, Microsoft’s development strategy for the Windows desktop has been mainly based on .Net. While you can still code for Windows 8 Metro in .Net, the SDK (software development kit) is not fully compatible with .Net for desktop Windows, nor Silverlight.