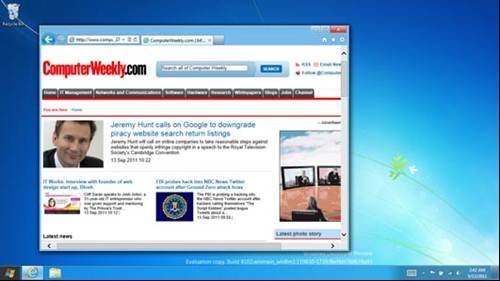 In order to support existing Windows applications, and for applications which are not suited to Metro, Microsoft is keeping old Windows desktop running in Windows 8 alongside the Metro-style user interface. If you tap the desktop icon on the Start menu, or launch a non-Metro application, then the familiar desktop appears. Most business users are likely to spend much of their time in the old desktop, since there are no Metro applications yet other than Microsoft’s samples. Note that even the old-style desktop makes use of the Metro Start menu, so tapping the Start button at the bottom left pulls up the Metro start tiles. It will not quite be possible to use Windows 8 without engaging with Metro at all, for those who prefer the familiar.