One of the easiest tech predictions to make about 2015 is around the expected launch of Windows 10 and the impact that the latest Microsoft operating system should have on the market. 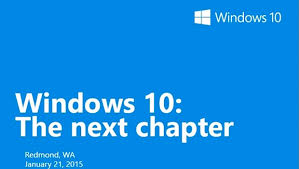 Details of the product and the launch timetable should become clearer later this month when the software giant holds its "Windows 10: The next chapter" event at its Redmond offices on 21 January.

This comes on the back of an unveiling of the software last September and then various suggestions that the full release would be late summer or autumn this year.

Last month, Microsoft COO Kevin Turner told the Japanese news service Nikkei that the launch would be "early next fall", which would position the launch in time for the key Q4 sales period.

The expectation is that as well as providing some details of just when the launch will happen the vendor will use the January event to show-off some of the functionality coming in the OS.

According to US reports the consumer experience should form the basis of the event and the vendor is concerned that it gets off on the right foot reassuring customers that the functionality they want is going to be included.

The last launch, Windows 8 went down like a lead balloon with some users that were disappointed to find the Start button had gone along with other traditional functions.

The first indication that the next OS would be called Windows 10 emerged back in September with the firm describing it as an OS that, “adapts to the devices customers are using — from Xbox to PCs and phones to tablets and tiny gadgets...Windows 10 will run across the broadest range of devices ever from the Internet of Things to enterprise datacenters worldwide.”

Over the last couple of months users have had the chance to demo the next OS and MicroScope had a look describing the OS as a move in the right direction likely to please both enterprise and consumer users.