Microsoft has officially entered the wearables market with the unveiling of its watch-like device – known officially as ‘Microsoft Band’.

The unoriginally named Band will retail for £135 ($199) and will focus heavily on fitness, reporting the likes of heart rate, calories, stress levels and even sun exposure. While it’s not know what OS the Band is running on, it will have integration with Microsoft’s personal assistant technology – Corona.

The Microsoft Band seems to have had a somewhat mismanaged launch with apps appearing in both the Apple App Store and Android Play Store before the official unveiling of the product.

While Samsung has already entered the smartwatch market and Apple is due to launch in early 2015, the Microsoft Band’s key differentiator is that it is compatible across the full gamut of mobile devices.

The folks in Redmond really are pushing the boat out with naming conventions this year. Microsoft also announced the health platform at the heart of the Band’s capabilities; it is called… the Microsoft Health Platform. 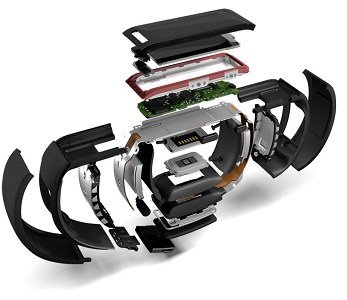 “The Microsoft Health platform includes a cloud service for consumers and the industry to store and combine health and fitness data to create powerful insights,” corporate vice president Todd Holmdahi said in a blog post.

The platform will also work with other popular fitness solutions such as UP by Jawbone, MapMyFitness, MyFitnessPal and RunKeeper. Microsoft had better be careful – if it keeps up this open ethos, its device strategy might actually succeed.