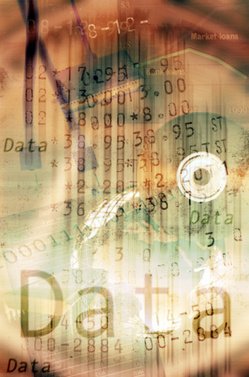 You know you've got a problem when people start denying it. "You're not a fat company," your so called analyst friends will say, "you've just got big data."

Big data. It's one of those weasel words they use to avoid embarrassment. When you're out of ear shot, they'll have no such sensitivities. "Did you see the state of his NAS?" an unscrupulous salesman will say, after he's left you some leaflets about upgrading to a bigger size.

It happens to us all. One day, we get a glimpse of your infrastructure and ask ourselves "whose is that huge array?". Then you'll realize that it's your data that's being mirrored.

It's a massive problem; the information lifeblood of the average British company is becoming increasingly sclerotic. Circulation is slow, and bandwidth pressure is sky high. It's all those fat video files and JPEGs - they're all loaded with megabytes. The body of the SME cannot use these, so the brain tells the network to store them, in the subcateneous layer of the infrastructure, on vital organs such as the hard drive and on the extremities (AKA the datacentre).

Your mind is tricked into thinking this information is useful. "Don't throw that talking head video away," a marketing buffoon will say, "we could analyse this for trends later."

So you start hoarding all kinds of crap which you kid yourself is useful; 'Facebook Likes', from people you've never heard of get stored, along with all kinds of other social media crud from start-ups with less shelf life than a sell by date avocado, but whose flabby bits will have a much longer legacy.

Pretty soon, you're all over the place - unstructured is the trendy phrase. You become weighed down and can't do anything quickly. You're fat and unstructured and lose all confidence, never going out to meet people.

But rather than kid you that this is healthy, and try to sell you more kit, there's a new breed of consultant emerging who will encourage you to shed some data. Their goal is to enable you to slim down so much that you can see your own footprint.

But beware, there are some real cowboys out there. Beware any quick fixes involving BYOD consciousness. Tablets will only make your data fat, warns Chris James, marketing director at Virtual Instruments. These gadgets encourage the wrong habits as does the availability of cheap storage. Both will send your BMI (BYOD mass index) sky high.

Most VARs would recommend a balanced CAPEX diet and OPEX exercises - don't do too much at once. The cloud isn't everyone's cup of tea and there are calls for cheap storage to be taxed.

Perhaps you should look at your data intake, say others. Once you have your data it's incredibly difficult to shift.  "Legislation is the best driver for data retention," says Bill Cannings, chairman of Chase ITS, so set yourself a policy where you don't ingest too much of it.

"Think before you create," says Richard Fox, IT director at Gem Distribution.

There's a 90:90 rule for data, if we understand Robert Rutherford, MD of QuoStar Solutions, correctly. "90% of data is written once and never read again," he says. On the other hand, any data that hasn't been looked at for 90 days needs to be archived at least.

Mac Scott, partner at KPMG's CIO Advisory practice, has a useful data dieting tip: "Stop the needless back ups. Many companies have back ups of back ups," he says. It gets to the point where the same data is backed up 10 times.

If you want to know how to do it, take inspiration from a client of Steve Shelton, head of data at BAE Systems Detica, a big telco which has lost 500 Terabytes. Surely that telco is dieter of the year! Reportedly, it's feeling years smarter and its started lots of new relationships. Well good for that telco I say.

There are all kinds of diet, according to Galvin Chang, associate director of global product marketing at RAID storage specialist Infortrend (mind you, his job title could lose some weight).

Data compression, de-duplication and vaulting are all popular.

Native file optimisation is on-trend in all the storage magazines. Whether this is a passing fad it's too early to say. Balesio runs some very good courses, by all accounts, which can eliminate 90% of your flab.

The most sensible thing to do, however, is not put the weight on in the first place, says Simon Gregory, business development director at CommVault. "Find out where the data is growing and only process the important stuff," he says.

Good advice indeed. Remember, tablets make you fat, regulation makes us fat, risk averseness makes us fat. So do yourself a favour and stop retaining information. You've got four limbs and only one brain, so use them in that proportion.