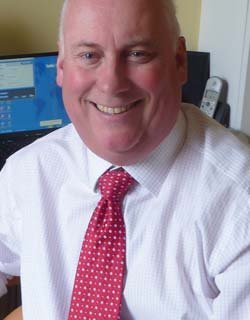 What is the best/worst advice you have received and from whom?
The best piece of advice I received was when I was eight years old: "Be prepared" by Sir Robert Baden-Powell, founder of the Scout Movement.

The worst piece of advice was to invest in blue chip high-tech stocks before the crash in 2000. Let's keep that one anonymous!

What is the best book you have ever read?
Brave New World by Aldous Huxley.

Tell us something most people do not know about you.
I am a Gemini.

What temptation can you not resist?
A free round of golf.

What is your most elusive goal?
To buy a chalet in the Austrian Alps.

Where is the one place you would like to visit before you die?
Murchison Falls in Uganda. I was born in Uganda and my dad used to go fishing there, but I was always too young to go with him.

Which bit of technology would you want with you if you were stranded on a desert island?
A satellite phone to call for help.

Who helped you get to where you are today?
I have been fortunate enough to have had many great mentors, but my wife is the main person who has helped me get where I am today.

What was your first car and how does it compare with what you drive now?
My first car was a MG1300 and it was not a lot different to what I drive now.

What do you believe in most?
Cause and effect.

If you could be someone else for a day, who would you be and why?
Fernando Torres. It was a childhood dream to be a Liverpool FC striker.

Do you have any pets?
We had a Burmese blue cat called Monty until very recently...

Who would you least like to be stuck in a lift with?
Gordon Brown.

Describe yourself in one sentence
I am an outgoing, driven and fair person.

Why are you good at your job?
Because I am lucky and hardworking (to paraphrase Gary Player).

If you were shipwrecked, who would you like to have with you?
I would like to be with Phil Michelson, one of the best golfers in the world, so he could teach me his short game.

Name three items that you would like to have with you if you were shipwrecked
A football, golf balls and a sand wedge.

Describe your perfect holiday
A safari to Uganda's Rwenzori Mountains followed by a week on Malindi beach in Kenya.

If a grizzly bear and a silverback gorilla decided to have a no-holds-barred fight, which would you put your money on?
The grizzly bear - gorillas are vegetarian.

Describe your perfect night out
A box at the Royal Opera House, with Placido Domingo singing.

Sum up the IT channel in one sentence
A mature and diverse B2B industry which, because it is technology-driven, is constantly evolving, making it as vibrant as ever.