To say that server – and indeed data centre – virtualisation has come on in leaps and bounds in the decade since we published our 2010 x86 Server virtualisation check point would be putting it mildly.

And yet, many of that paper’s key messages remain important. Its segmentation of the “virtualisation journey” holds as true now as it did then, albeit perhaps with a little more overlap between segments. 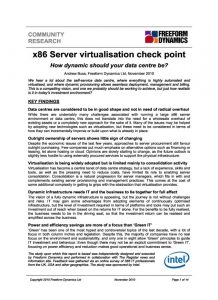 Indeed, it remains a worthwhile read for anyone wanting to quickly get up to speed with the basics of what we then called dynamic IT or the self-service data centre – but is now better known as the software-defined data centre (SDDC).

In many ways this mirrors what we find in many of our Throwback Thursday investigations: that the fine details of systems and software can change massively in just a few years, and so can the terminology, but the overall direction of business IT remains relatively constant.

However, once IT strategy does start to change, the speed of that change can increase remarkably quickly. IT directors and managers might not like to admit it or see it as such, but IT is often heavily influenced by what some see as industry fashions, and others would call ‘letting someone else find the bugs first’. Once a few high-profile leaders have proved the enterprise viability of public cloud, say, or of using ‘integrated stacks’ as we called them then – a modern equivalent might be software appliances or HCI – the risk-averse mainstream can warm to it very rapidly.

The one big area where the check point does look a bit dated is there in the title: x86 servers may still predominate in the data centre, but they are no longer the absolute centre of the story. Not only are alternatives such as ARM-based servers gaining ground, albeit from a small start, but more significantly, as the performance growth rate of the x86 family slowed in the decade following 2010 we saw a big uptick in the use of various offload engines.

Chief among these were GPUs, whose massively parallel structure helped drive a revolution in real-time analytics, machine learning and deep learning. There were also Smart NICs, which have more recently morphed into DPUs, or data processing units. These are in essence powerful network adapters which process data streams far more efficiently than a CPU can.

They are just technical details, though. Even if a modern data centre or cloud server were ARM-based, with GPUs and DPUs to handle specialist tasks, the fundamentals of IT service delivery remain broadly the same as they were. The key issues remain operations and management, automation, availability and recovery, and of course security and governance.