How has desktop virtualisation evolved since 2009, when we reported that “virtualisation is here,” but that it was still “early days for mainstream adoption” on the desktop?

As our contribution to the bit of fun that is Throwback Thursday, we’re taking a stroll in the Freeform Dynamics archives.

In some ways it’s still 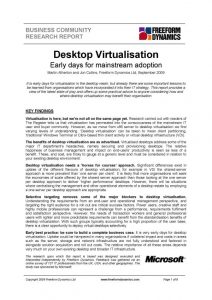 early days, simply because of that evolution. I was reminded of this recently while writing about the allure of the ubiquitous desktop – the idea that if my desktop exists virtually in the cloud, rather than on a specific piece of hardware, then I can log in and use it from anywhere that I can get online, on almost any device.

Given always-on connectivity – which is admittedly not universally guaranteed – I don’t even need to own a PC any more.

Back then, we were thinking of VDI, Windows and Citrix terminal services, and application streaming. Now, it’s as likely to be desktop-as-a-service, Microsoft’s Windows 365 ‘cloud PCs’, Chromebooks, or even tablets and smartphones. Yet although the Chromebook hadn’t been invented in 2009 – ChromeOS marked its 10th birthday earlier this year – much of the rest has been around for a while, including the cloud PC concept, so it’s safe to say that many of the report’s conclusions still hold and much of its advice remains valid.

In particular, the messages about selective targeting and ‘horses for courses’ are still important, although today we’ve expanded them somewhat to consider categorising and grouping users by their needs and expectations. It’s just as true now as it was then, though, that desktop virtualisation offers even more potential advantage for techies than it does for desk-based transaction workers. Indeed, many techies will already be running desktop VMs for testing, sandboxing and the like, with or without a VDI roll-out.

Still, with all those new device and delivery options, we can also see VDI losing ground to the web. Already, many users – whether at home, at work or working from home – live in their web browsers. Sure, you can deliver that via VDI, but there’s other ‘lighter’ and perhaps more budget-friendly ways to do it too. The only question – and this is the key one that ChromeOS aims to answer – is how well you can then manage the local system that the web browser runs on.

Which suits your business best – OpEx or CapEx?

The other big shift is the huge change in the financial models. In 2009, a major concern regarding VDI was the cost of the necessary server, storage and network infrastructure – in other words CapEx, or capital expenditure.

Now, it is as easy, if not easier, to achieve the same results via subscription payments to a software-as-a-service (SaaS) provider, making it operating expenditure or OpEx. And while CapEx will almost certainly be cheaper in the long run, there are definite short to medium-term business advantages to running on OpEx.

Overall though, the report is still an interesting read, especially if you can mentally redefine ‘desktop virtualisation’ to include all those other ways of delivering apps, services and yes, entire desktop environments.