We have looked at many reports from years ago that show that, whilst technology details may have moved on, many of the underlying factors haven’t changed very much. But this glance back to 2009 illustrates one area where things have changed dramatically: the use of mobile services and devices. Can you remember how things were back then, and do you realise just how much things have changed?

As our contribution to the bit of fun that is Throwback Thursday, we’re taking a stroll in the Freeform Dynamics archives. 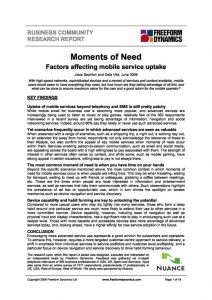 Back in 2009, our surveys told us that whether for business and personal purposes, the two biggest uses for mobile devices – which back then mostly meant mobile phones and PDAs – were voice calls and text messages. I don’t know about you, but I rarely send or get SMS messages now, and using either of my smartphones for telephone calls is certainly not something I do often.

Interestingly, close to the bottom of both activity lists in 2009 were things that today are much more likely to take place on a mobile, namely finding your way, information lookup, and keeping up with the news.

Something that was a prime business need for me, namely using the device for work-related email activities, took place at best several times a week for almost 80% of those taking part. Oh, how things have changed! But one thing that hasn’t changed is using the device for storing contacts – it had significant usage back then and remains important.

Some of the results from 2009 are quite startling today, given how mobile devices are used now. One of these was that using mobiles for social networking, even for personal use, was marked rarely or never by almost 60% of respondents. Another is that playing games or music on mobiles in their social lives was a daily activity for only just over a fifth of people.

Mobile maps were not a ‘given’

On the other hand, some of the predictions were pretty accurate. An interesting one came in figure 15, and highlighted the fairly widespread expectation that we would see growing mobile usage in the following two years of social networking, online shopping, and watching videos or TV. Those folks were clearly on the ball.

If you want to gaze in wonder at our mobile innocence – or perhaps our naïveté – back in 2009, please take a look at the original report which can be found here on our website.