The first thing that struck me when I re-read our ‘Linux on the Desktop’ research report from 2009 was how much the conversation was actually about dealing with the cost and complexity of running Windows estates.

Sure, some of the 1,275 respondents to the survey we ran were hard-core open source enthusiasts, but they were in the minority. Most of those providing us with input were IT pros considering Desktop Linux as a practical solution to a significant ongoing problem. Cost reduction was the primary concern, along with improving security and reducing operational overhead and distraction. 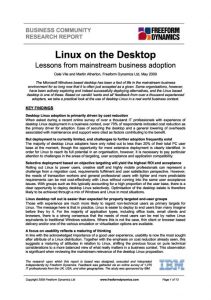 The second thing was that the core problem that Desktop Linux was seen as a solution for back then is still very much with us in 2020. While Microsoft has arguably made good progress on security, the sentiment among IT pros around cost and complexity doesn’t seem to have changed that much. Indeed many I speak with today complain that the Windows-as-a-Service model, or more specifically how to work around it, has just increased the level of pain and distraction.

But some things clearly have changed in the intervening decade. Desktop Linux as a proposition for mainstream business computing has pretty much been abandoned. It’s still relevant for a range of technical computing use cases, but nowadays you’re unlikely to consider it for Angela in Accounts, Martin in Marketing, or Will in the Warehouse.

The ‘disruptive’ alternative now is the Google model that manifests commercially as Chrome Enterprise, backed up by Google Workspace (G-Suite as was). The underlying premise of moving from client-resident to cloud-based applications and data is actually a better solution to the Windows complexity problem than Desktop Linux ever was.

It’s the delivery model, not the desktop operating system

And if you are tempted to point out that Chrome OS is just a Linux distro, so Desktop Linux is still alive and well, you are missing the point. I deliberately used the word ‘model’ earlier, as it’s how you define and solve the problem that matters, not whatever software sits on the user’s machine.

This is why I think all the talk of Windows in the cloud is misguided in the context of mainstream business computing. Shifting that horribly complex Windows environment to the other side of the network doesn’t make it go away, even if virtualisation simplifies some aspects of delivery. Microsoft’s rumoured efforts to produce what a ‘Windows Lite’ – basically a Chrome OS equivalent – are much more relevant to the longer-term discussion of how desktop computing will transform over time.

That being said, unless you are a startup with the luxury of a greenfield approach, adopting a model like Google’s generally isn’t that easy. If you’re heavily invested in the traditional Wintel model (or indeed Mac-based computing, which is fundamentally the same), there are lots of complicating factors.

Funnily enough, most of these are identical to those covered in the 2009 Desktop Linux report – application compatibility, interoperability, company politics, user segmentation, user experience, and so on. A lot of the content is therefore still relevant, even today.

So, for another Throwback Thursday trip down Memory Lane, and a reminder that some core principles and considerations never change, grab your copy of this old classic here.