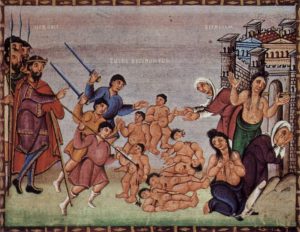 The Massacre of the Innocents Matthew 2: 16

After presenting the infant with their analogue, hacker-proof gifts, the Three Wise Men received a text warning them not to go back to Herod but to return home by another route. So they left for Babylon after giving their phones to a camel trader on his way to Jerusalem. When their phones arrived in Jerusalem but they did not, Herod threw a hissy fit. After he had calmed down, he commissioned a Google analytics search of all buyers of baby goods in the Bethlehem area over the past two years, being more accurate (and easier and cheaper to access) than the Roman census returns which had yet to be collated.

His team also suggested a special health and safety app for male children to be promoted via pop-ups on Judean nationalist news sites, to enable tracking software, under the guise of  necessary cookies, to be installed on the phones of respondents.

But Joseph had installed  Anti-Spyware on Mary’s phone, after she became pregnant and not by him. So when she downloaded the app he was alerted to the additional tracking software. So they cashed in their bitcoin, dropped her mobile down a well and departed for Egypt. 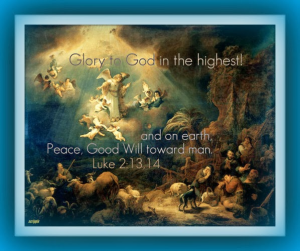 As in previous years I will be splitting what I would have spent on Christmas Cards between  Barnardo’s  , NSPCC  and The Salvation Army