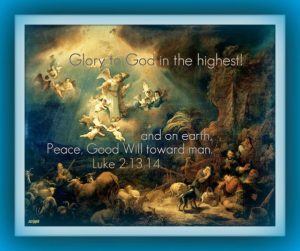 “Glory to God in the highest, and on earth peace, goodwill toward man”:

regardless of whether you think God likes them or is pleased with their views on:

The Christian, Jewish and Secular (including Cyber) worlds need equivalents of the Amman Message.

In 2004 over 200 scholars from over 50 countries came together. This gave it an authority equivalent to the first Council of Nicaea. But instead of agreeing the bases for future persecution they agreed the core principles of tolerance:

Would that the Message was better known and more widely applied.

Meanwhile many versions of the Bible confine goodwill to those whom God “favours” or who “please him”, implying that they reserve the right to be as intolerant as posting vitriol on social media during the recent election. The Amman declaration carries sound guidance on how to handle those with whom you profoundly disagree. Leave it to God to “punish” them, if that is what you really think they deserve.

P.S. In the text of the King James Bible “Man” is synonymous with “Mankind”. Queen Elizabeth never forgave John Knox for his diatribe against her sister and her cousin.