GUEST BLOG: Neurodiversity Celebration Week takes place in the UK on 15 to 21 March 2021, and World Autism Awareness Week is from 29 March to 4 April 2021. In this contributed blog post, Larissa Suzuki shares her personal experiences and advice as a computer scientist, engineer, entrepreneur, inventor and an autistic person. Read more about neurodivergence in tech here.

One way to address disabilities is to change the environment to enable “belonging”.

Belonging is central to every aspect of our humanity and is essential if we are to thrive and survive as species. To understand how we can foster belonging we must first understand what prevents it. According to Professor John A. Powell it is caused by what he calls “othering”.

We move towards belonging when we celebrate and value our differences and our similarities as a group. When there is no othering of individuals of any identity, it can connect people by co-creating our world together. Each one of us has a particular relationship with belonging, but the imperative rule of belonging is that it can only succeed if no one is excluded.

Othering happens when we communicate to people that they are not a part of our “we” because of their apparent differences. Othering happens at all levels, between two people, different communities, in institutions by the way we build culture, structures and policies.

Globally, about 70 million people have autistic spectrum disorder. As an autistic person, I have experienced othering in many circumstances. When I was a kid there was no diagnosis for people like me, especially as a girl. I was one of those who did not have any coping mechanisms, making me a very vulnerable person. For many years I had to suppress self-calming repetitive movements, fake a smile in an environment that I found uncomfortable or distressing. The hardest part has been not being able to read people’s intentions nor pick up the cues. It has made it difficult and dangerous for me to belong to the “we”.

Despite consciously evaluating my own behaviour and mirroring others to escape ostracism, verbal and physical abuse, masking has been profoundly exhausting.

Research has found that autistic people are more likely to be exploited and suffer physical abuse, and that autistic “masking” is correlated with isolation, depression and suicide (Cage, et al; Cassidy, et al).

Oftentimes, to feel belonging, small gestures may suffice: someone asking how we are today or what we need. Other times belonging can be more heartfelt based on actions that speak more: we need you here, you are seen, you are important, valued and you are heard. That is the principle of empathy. Researcher Brené Brown differentiates empathy from sympathy in which empathy fuels connections whereas sympathy drives disconnection. Basically, empathy never has a sentence that starts with, “At least you have X”.

Othering is something that unfortunately we have all experienced and we have done.

To change this behaviour, we must understand how and when it occurs. Recall a time when you were treated like the other. How did that make you feel?

In my case, I did not feel like myself, thought of myself as an outsider, questioned my own identity and the purpose of my humanity, labelled myself as “one of the weirdos”. I had periods that I felt completely invisible, disconnected from my own self and alone juggling between two different worlds. I did not belong entirely to either of them. And that has put me in a perpetual state of depression. Each year, over 25% of the population in the European Union suffer from depression or anxiety, and due to stigma and isolation, one million people die by suicide each year.

When we fear our differences, we then deny the connections we share. Marie Curie once said: “Nothing in life is to be feared, it is only to be understood. Now is the time to understand more, so that we may fear less”. To understand and value our differences as individuals we must first embrace ourselves and recognise the diverse composition of our own identity.

We all have multiple identities. The more we understand our identities the more we will understand those with whom we wish to bridge connections. The connections that we make involve reaching across the lines of differences, of ways of thinking, of what goes beyond the neurodiverse traits of a person, so that we can form more expansive connections. Human connections should be grounded in empathy, recognition and a shared humanity.

Belonging never requires anyone to sacrifice what makes them unique, different and special. If we listen and are present, we will not miss what others have to share, their experiences and the essence of their humanity. By doing so, we may create bridges with those whose distances from us are greater and where the stakes are higher.

Listening and empathy can build a safe space for people to share experiences, hear and appreciate one another.

Similarly to the task of listening to others, we should open up to changes within ourselves. If you could choose an identity different from yours, how would you perceive yourself? What would you change or learn to appreciate by looking at things from an empathetic perspective?

We should always remember that belonging is not only about introducing someone to a space or to a group of friends. Belonging is not “fitting in” or “mimicking” others. The real sense of belonging is co-creating spaces, groups and institutions and collectively designing how it will operate and help humans to thrive. Innovation, creativity, and empathy is most likely to come from parts of us that we don’t all share.

When we take on this journey together, we move away from the idea of “myself” and “them” to a future of a collective unity – “we”. It is a long journey full of remaking. We have shared responsibilities and mutual say in co-creating belonging so that no one needs to check parts of themselves at the door. When you design well for people of all kinds and abilities, you design well for everybody else.

In the midst of all the challenges we are facing today, for all the problems that feel beyond our control, maybe we could start here, creating a community where everyone truly feels they belong. We could start with: 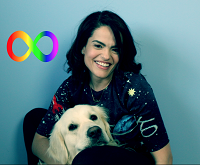 Dr Larissa Suzuki is an award-winning computer scientist, author, engineer, entrepreneur, philanthropist, inventor, and neurodivergent. Her career includes over 16 years working in engineering, focusing on AI, smart analytics and the Interplanetary Internet. Her continuing academic work is at UCL and University of Oxford where she serves as an Honorary Associate Professor in Computer Science and a guest lecturer, respectively. She has received numerous awards and recognition for her contributions to industry and international science.