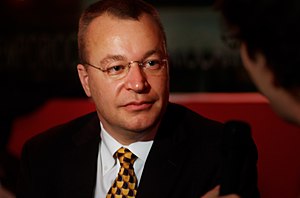 This week is witnessing the birth of a plethora of new technology at the Consumer Electronics Show in Las Vegas – our very own Digital Disney Princess Caroline Baldwin is there for Computer Weekly, so check out her Inspect-a-Gadget blog. Yet, what are we all talking about? Stephen Elop and Nokia.

You may not be able to describe the CEO as charismatic, but he does get tongues wagging when he lets out choice titbits about the future of the ailing mobile manufacturer which once wore the industry crown.

Many questioned Elop’s decision back in 2011 to join hands with his old bosses at Microsoft and wager Nokia’s future on the Windows Phone operating system. Yes, the handsets won over many of the critics, but the likelihood that another mobile operating system would capture the imagination of a public obsessed with iPhones and only just getting their teeth into Android seemed farfetched.

Some thought it would have been safer to go down the Android route – look at what it has done for Samsung – or even taken a page from HTC’s book, spreading its bets across both Google’s open source OS and Microsoft’s new player. But Elop insisted that a “three horse race” was needed and Microsoft was the right choice to enable the Finnish firm to take on Apple and Google.

Hmmmm. Well, it seems that dedication to the brand is wavering already…

In an interview with leading Spanish newspaper El Pais, Elop told the reporter sticking with Windows Phone was no longer the only option; despite his previous staunch replies to journalists – including this one – that it was Nokia’s set future.

“Today we are engaged and satisfied with Microsoft, but any rotation is possible,” he said.

Now speculation is rife. Will Nokia ditch Microsoft? Will it finally launch an Android handset? Will either of these moves save the company from the certain doom it is facing thanks to the current smartphone wars?

I thought it was mad then and I still think it would be mad for Nokia to ignore Android as it goes forward. According to Gartner, it holds over 70% of the mobile OS market share and sold over 120 million handsets in the third quarter of last year. The same research showed Microsoft’s mobile OS held just over 2% market share.

Elop is a careful man who is less fluffy than other CEOs and only speaks when necessary, so there is no doubt in my mind this comment was meant to lead us to conclusions of an Android future. But he needs to stop dragging his heels.

I can sympathise that he might now was to anger the not-so-sleepy giant that is Microsoft CEO Steve Ballmer, but the longer he leaves it, the less chance Nokia has of making an impact on the Android market and the emptier the coffers get to fund, not an iPhone killer but a Samsung Galaxy S slayer.

Mobile World Congress is less than two months away. Perhaps Elop will stand up and make a public decision then. I hope for the sake of Nokia he does.