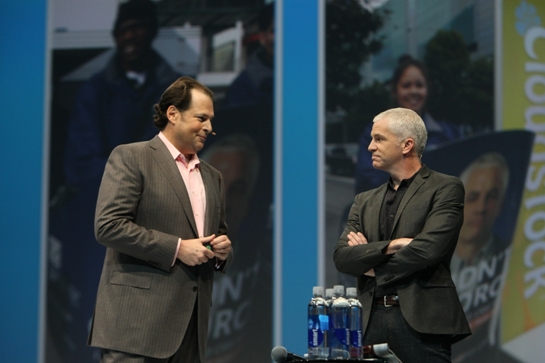 Benioff presented other examples of Microsoft’s anti-Salesforce.com advertising campaigns during his keynote, with adverts running the same message being placed in the Wall Street Journal and The Economist.

He then invited the actor, called Bernard, who featured in the ads to join him on the stage. Bernard emerged to the ‘Empire Strikes Back’ music and Benioff asked if he would “come back” to Salesforce.com.

The rivalry has been fuelled by Microsoft suing Salesforce.com earlier this year.

Microsoft recently invited Salesforce.com and Oracle customers to consider its ‘Cloud CRM for Less’ in an open letter, offering rebate of $200 per user switched to Microsoft Dynamics CRM Online between now and 30 June 2011.

Perhaps a dance-off would be suitable for the next round of the Salesforce vs. Microsoft battle?