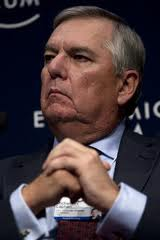 CSC chief Michael Laphen announced his retirement today after a year of unresolved scandals.
His statement followed reports of the resignation yesterday Carsten Lind, CEO of CSC Denmark, the centre of an accounting scandal that caused the Securities and Exchange Commission, the US competition watchdog, to launch an investigation in February.
Laphen said CSC management had got the $16bn company on a solid footing. “I am confident that the company is well positioned for its next phase of growth and development,” he said.
CSC followed the regulatory probe by sacking or accepting resignations from half its Nordic finance staff. It was simultaneously in a legal dispute over its unfulfilled £2.9bn contract under the UK NHS National Programme for IT. The ongoing delays led it to repay the NHS £170m two weeks ago. It meanwhile faces shareholder lawsuit in the US.
It has also been shaken by spending cuts by the US government, its largest customer. The US public sector accounts for 37 per cent of its business, most of it from the Department of Defence. CSC forecasts predict a return to growth in public sector business next year. The company’s troubles have led to talk of a break-up or take-over among some City watchers.
Its share price had plummeted 40 per cent in the last year but rebounded briefly today on the news of Laphen’s retirement.
60-year old Laphen became chairman, president and CEO in 2007 after 30 years at the company. He presided over a shake-up that led to nine of CSC’s 10 executive directors being replaced, six of them last year. Vice president and controller Donald DeBuck is the only surviving executive who predates Laphen’s taking command. Both were appointed executives in 2001, Laphen serving as president and chief operating officer. DeBuck served in various positions including temporary finance chief.
CSC’s revenue has remained flat for the last four years. It booked $14bn of new business in the last year. Its operating margin has been squeezed to below 7 per cent. It has been increasing its offshore business to counter cut-price overseas competition. But it maintains that its competitive advantage lies in sustaining its longtstanding strategy: providing broad-base, big-ticket IT services and software to big-ticket sectors. It has advanced its cloud services to this end, earning a commendation from KPMG.
SearchCIO
SearchSecurity
SearchNetworking
SearchDataCenter
SearchDataManagement
Close