The Yahoo! Cloud Serving Benchmark (YCSB) has ‘determined’ (by its own measure) that MongoDB provides greater scalability than Cassandra and Couchbase in all tests, by as much as 13x.

This suggestion, or determination if you give this benchmark full credence, was provided by independent benchmarking and performance testing organisation United Software Associates.

The firm now suggests that MongoDB provides “more predictable scaling” than what has been somewhat disparagingly called ‘niche NoSQL alternatives’ including those named above here.

No need for modesty?

The report proposes that MongoDB “overwhelmingly outperforms” Cassandra and Couchbase in the following kinds of deployments:

• where the data size exceeds that of RAM,

• where data is partitioned across multiple servers and,

• where data is replicated for high availability.

“While performance is important, it must be considered along with many different criteria when evaluating database technology,” warns Sam Bhat, CEO of United Software Associates.

“The goal of this report is to take a closer look at scalability, another critical factor used to determine the right database technology for a project. MongoDB proved to have the best and most predictable scalability, better than either of the niche NoSQL products,” he said.

The following results are based on evaluation of two workloads using YCSB: Workload A, an equal mix of reads and updates, and Workload B, which consists of 95% reads and 5% updates.

All tests were performed with 400M records distributed across three servers, which represents a data set larger than RAM. Each test performs 100M operations and records throughput and latencies at the 95th and 99th percentiles for reads and updates separately.

Don’t just take our word for it

“We encourage readers to use our findings as one of many inputs to their own evaluations and to thoroughly test a range of database functionality that fits their application,” said Bhat. 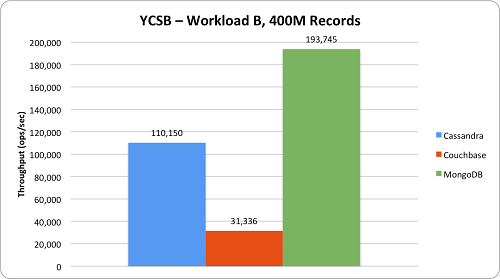