Microsoft makes Windows, but Microsoft isn’t really as focused on Windows these days as it is on its Azure cloud platform and new extensions that emanate into the world of Artificial Intelligence (AI).

Redmond isn’t exactly official in terms of the above statement, but week after week we see new announcements coming forward that further fluff the feathers in Microsoft’s already very cloud-centric focus.

This month (March 2018 actually, but who’s counting?) saw the firm launch the public preview of ‘Serial Console’ access for both Linux and Windows Virtual Machines (VM).

But what is Microsoft Serial Console?

This Microsoft technology provides a console interface (a control screen GUI, basically) that allows cloud developers and their operations counterparts to manage virtual machines on Azure.

But it’s not just management, Serial Console is dedicated to fixing broken clouds.

“However, we have learned from many of you that sometimes this isn’t enough to diagnose and fix issues. Maybe a change you made resulted in an fstab error on Linux and you cannot connect to fix it. Maybe a bcdedit change you made pushed Windows into a weird boot state. Now, you can debug both with direct serial-based access and fix these issues with the tiniest of effort,” said Sanders, in a blog post.

Microsoft claims that this technology will feel like having a keyboard plugged into the server in the Azure datacentre, but in the comfort of your office or home.

Serial Console is configured for a variety of Linux distros supported on Azure including CentOS, CoreOS, Oracle Linux, Red Hat, SuSE and Ubuntu. 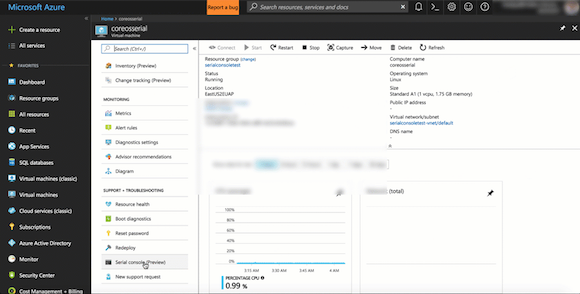