Git has become a prefix in and of itself.

Comparatively new to the Git-brand universe is Gitpod.

Gitpod is an open source developer platform designed to work at automating the provisioning of ready-to-code developer environments for applications running in the cloud.

It frees engineering teams from the friction of manually setting up local dev environments. Natively integrated with GitLab, GitHub and Bitbucket, Gitpod automatically and continuously prebuilds developer environments for all branches.

From its early autumn/fall news stream Gitpod has announced that it has created a new open source project (licensed under MIT) around its own `OpenVSCode Server` implementation of upstream, stock VS Code.

This project is designed to enable every individual developer and/or company to run upstream and stable VS Code in the browser.

NOTE: Microsoft explains that Visual Studio Code (VS Code) is a streamlined code editor with support for development operations like debugging, task running, and version control. It aims to provide just the tools a developer needs for a quick code-build-debug cycle and leaves more complex workflows to fuller featured IDEs, such as Visual Studio IDE.

By doing so, Gitpod is making a browser-based VS Code developer experience accessible for everyone allowing developers and teams to run VS Code on cloud-powered servers and access it from any device – all you need is a browser.

“Over the last few months, we have been approached by multiple large organisations and individual developers asking how we run Gitpod’s ‘OpenVSCode Server’ implementation, as they wanted to adopt that approach within their own products and daily workflows,” said Sven Efftinge, co-founder and CEO of Gitpod.

Efftinge reminds us that (at the time of writing) Microsoft hasn’t yet published the source code it uses to enable GitHub Codespaces.

But (with the above in mind) since the Gitpod team use the same low-footprint technique in Gitpod, it thought it might share this with everyone. Efftinge’s hope is that this eliminates the need for bad forks of VS Code that introduce unnecessary complexity.

“Cloud-based development environments are quickly becoming a favoured approach by cloud native developers to lower the barrier of contribution,” said Chris Aniszczyk, CTO of the Cloud Native Computing Foundation. “As usual, Gitpod is at the forefront of delivering solutions that move the entire industry forward. Their new ‘VScode WebServer’ project will certainly allow professional development teams to write code via a browser.”

The Gitpod team asserts that the launch of Github Codespaces has pushed browser-based remote development into the mainstream.

With Gitpod’s creation of the ‘OpenVSCode Server’ open source project, Efftinge says that dev teams will have access to all the benefits of cloud-based IDEs in a vendor-neutral solution.

Teams and individual developers can use the most popular IDE in the world on any device, at any time, deployed on any machine, including access to all VS Code extensions via the vendor-neutral OpenVSX marketplace – another project that Gitpod initially created. 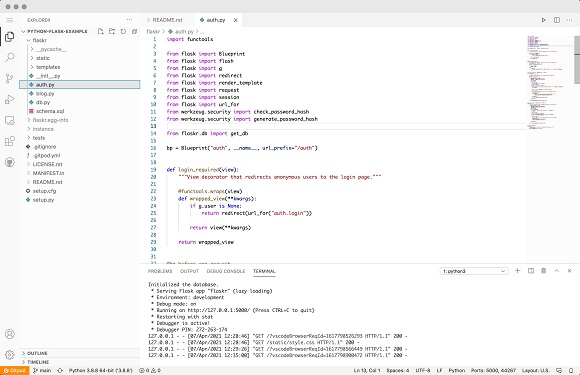