It’s easy to knock open source; there are frailties in fragilities in all code and open source libraries have been variously castigated by a litany of security software vendors attempting to ply their wares.

But open source is having a harder time penetrating big-scale enterprise — this we know to be true.

IBM Red Hat acquisitions notwithstanding, the road to open source penetration in enterprise through tangible software application development interaction is not as high as it could be.

Developer cloud provider company Digital Ocean says it has spoken to over 4,300 developers around the world to compile an open source barometer report.

Key suggestions emanating from this study suggest that twenty years in, just over half of developers are contributing to open source projects (55 percent).

That’s less than what companies expect from their employees though: three out of four respondents said their companies expect them to use open source software as part of their day-to-day development work.

Developers say they want an easier entry point into the open source community.

Respondents listed not knowing where to start as the top obstacle to participating in open source projects (45%). Other reasons include doubting they have the right skills (44%), and companies not giving their employees time to contribute (30%).

The ‘Currents’ report is Digital Ocean’s fifth annual study of this kind and this year it has been solely focused on open source.

Inspiration for the nation

According to the report, “The top motivation is [the opportunity to] improve coding skills — developers in the UK especially cited this (78 percent vs. 69 percent overall). A close second was being part of a community — even though developers tend to work independently, they still look for ways to connect with other coders and learn new technology. Thirty seven percent of developers said they would contribute more if their companies gave them additional time to do so.”

Of the 4,349 survey respondents, 58 percent self-identified as developers, 22 percent as students and 10 percent as systems administrators — the rest identified as managers, technical support or ‘other’.

As we approach the end of year ‘silly (survey) season’, this report stands out as comparatively open and informative and a whole lot better than most of the contrived ‘survey analysis studies’ simply designed to push a self-serving pre-defined agenda with loaded questions.

< class="wp-caption-text">What are your top motivations for participating in open source? 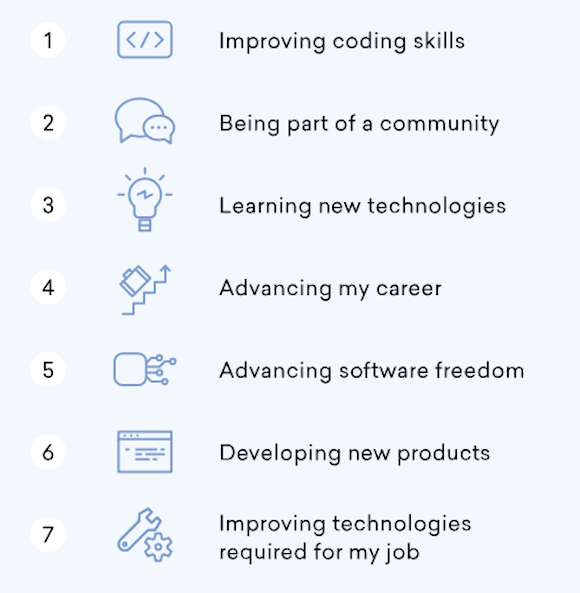 In the last three years, which open source projects have excited you most?