I write a lot about how UK IT professionals are often replaced by workers from overseas using Intra Company Transfer (ICT) visas.

These workers are attractive to UK businesses because they cost much less. But there is also a huge tax advantage for these workers that means they can afford to come to the UK on minimum wages.

Not only do workers in the UK on ICT visas get more of their money, the UK government gets less.

The way expenses are bundled with salaries and how the tax is calculated means government attempts to raise the minimum salaries required for these workers are futile.

In the current situation UK IT workers who pay a lot of tax are being replaced by offshore workers that don’t pay much if any at all.

Here is Migration Watches explanation of how the tax system benefits ICTs:

1. Tax and National Insurance rules are heavily biased towards ICTs to the dis-advantage of UK workers.

2. Intra Company Transfers (ICTs) have been excluded from the government’s cap on economic migration.  Their numbers have been significant in the recent past, rising from 22,000 in 2008 to 29,000 in 2009.

3. Meanwhile, there have been some significant changes to this route. The salary threshold for a visa valid for up to 5 years has been raised to £40,000 while a new visa has been introduced, valid for 12 months in a 24 month period, for those earning between £24,000 and £40,000.   The latter are unlikely to show up in immigration figures which include only those who arrive for more than 12 months.

4. In recent years only 50% of ICTs have earned salaries of £40,000 or more.  This might suggest that the numbers will fall to around 15,000 visas a year.  However, there are very significant financial advantages for both the employer and the migrant worker so the numbers could increase considerably.

5. The three main advantages are:

c)                  The salary offered is supposed to be consistent with the going rate in the UK so as to prevent British workers being undercut.   For this purpose, each Standard Occupation Code (SOC) has a minimum salary[3].  However, the UKBA accepts the lower quartile of salaries based on the UK as a whole.  Thus it is perfectly legitimate to offer a salary for a job in an expensive area like London based on the bottom quartile of salaries for the whole of the UK.

7. Table 1 below shows the breakdown of costs and net pay for a UK worker and Indian ICT worker for the first year of employment, each with a salary of £40,000; the ICT worker received 70% of salary in the form of allowances.

Table 1:  Breakdown of costs of a UK and an ICT worker for the first year 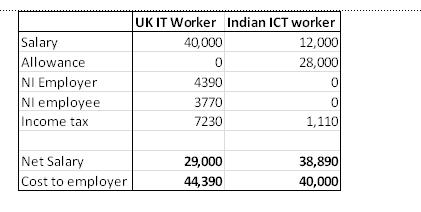 9.  After the first year the national insurance is paid but it is only on the non-allowance component of the salary.

Table 2 below sets out the costs for the second year.

Table 2:  Breakdown in costs of a UK and an ICT worker for the second year 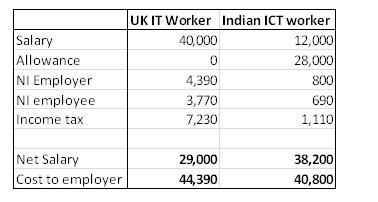 10. These financial advantages to a company in hiring an ICT worker rather than a UK worker incentivises a company to replace UK workers on cost grounds  and means that the numbers of migrants in this uncapped category have the potential to grow substantially. Changes to the taxation rules to create a level playing field are essential.