I write a lot of lists… no really, a lot.

It’s not uncommon for me to draft my daily to-do list three times in a single day; sometimes I write it the night before and then re-do it the next morning. As a result, I go through a lot of paper pads and have long looked for other ways to keep notes.

While the endless list of free apps that support note taking and list making are all okay, none have really stuck with me. Even as a devoted Google Docs user, the sidebar ‘tasks’ function just seems to get in the way. I have even tried erasable paper pads from the likes of Rocketbook and Pilot Frixion erasable ballpoint pens.

It should be clear then, I’ve been looking for a 21st Century note-taking and making tool that is eminently re-do-able, erasable, portable and usable. Not from the world of tech PR, the reMarkable 2 actually showed up on my Facebook pages as an advertisement, so I decided to get hold of one.

At 4.7 millimeters thick, the reMarkable 2 isn’t as thin as paper (obviously) but it’s that much thinner than an iPad or Android tablet to make it feel like a completely different kind of product. The reMarkable 2 is designed for handwritten notes and information management, but nothing else i.e. you can’t play Angry Birds on it, watch online television shows or even visit Facebook or Twitter.

The look and feel of the reMarkable 2 is surprisingly close to paper. The front screen has a kind of ‘slightly roughened’ surface (they call it CANVAS) and the unit itself makes a pencil sound as you write on the screen itself.

The smart software here delivers the device’s handwriting-to-text conversion trick, but users do need to be connected to WiFi (or a hotspot) for that power to happen via the company’s Connect service (it’s driven in the cloud and on the web, obviously)… and the accuracy levels are high.

Quite apart from the ‘cool factor’ of being real electronic paper, there’s an argument to say that using this kind of device in a meeting is a far less intrusive form of technology when compared to a keyboard (which a user would hide behind, as opposed to laying down on a desk or table for others to see) and yet it will still produce notes and drawings that can be shared with the group afterwards.

The device is built with 1.2 GHz dual core ARM processor and runs its own proprietary operating system. There is 8GB of storage, which represents a lot of notes and the battery life runs (genuinely) up to 2-weeks. It supports PDF and ePUB documents so you can download agendas and white papers to it very easily. It weighs 14.1 ounces (0.88 pounds) and works across both 2.4GHz and 5GHz Wi-Fi.

It is a very nice usable device, but it’s not cheap at £299 with the Connect service for Google Drive and Dropbox integration. The pens are extra. The standard ‘Marker’ is £49 and the ‘Marker Plus’ is £129, although again that sounds like a lot for a pen, this is part of an electronic device kit and the electronic eraser end on the high-end marker pen is impressive i.e. it almost feels like rubber rubbing along the surface.

The pen tips don’t last forever as they wear down, but they last several weeks (if not months each) and some users report being able to ‘sharpen’ them using a nail file.

There also several cover ‘folio’ options for the product, but let’s get back to usability.

Powering up the reMarkable 2 with its power ‘wake’ button is simple enough. You can set a passcode if you want to keep you stuff safe too. There’s a USB-C port for charging and that’s about all you need to think about before first writing on the monochrome 10.3-inch (1,872 x 1,404) display.

If there is one thing missing on the reMarkable 2 (spoiler alert, it’s not a YouTube app), it might be a need for some symbols to be able to incorporate into your documents. What I mean is simple icons to denote bank details or other things. What you can of course do is draw these yourself on a page you’re working or on a clean page. I had a lot of fun creating my own logos in large-size higher definition and then shrinking them down using the sizing tool on the left toolbar.

There is a highlighter function to Stabilo Boss highlight your text or images, but it’s important to remember that the unit is monochrome, so the ‘yellow’ highlighter shows as gray… but if you log in to the reMarkable Android or Mac OS X app it does show genuine yellow highlights on the screen.

There is no backlighting on this device, so you willl need a light bulb, although natural daylight is also available and there is nothing of the glare issues you might associate with a smartphone.

There are a whole selection of templates with bulleted lists and graph paper and so on. As you keep writing new blank sheets will appear as you go. The pen shows your handwriting exactly as you know it from the last time you used a piece of paper, so it’s much more ‘you’ than a digital signature screen in a shop, store or bank.

There are several pen tip styles to choose from on the screen, but I chose the thinnest ‘fine-liner’ or ballpoint pen for most of what I wanted to do. Lastly, the marker pens are magnetic so they attach themselves nicely to the device itself.

For a final verdict here, you’re going to want to know whether the reMarkable 2 will replace my paper, pen and pads – the answer is yes, mostly, eventually. This is a superb product and one that will form an essential part of my desktop and travel work set up, but I feel that despite it being massively intuitive, fast to set up and simple to use – after all, you just write on it – the deeper use of it as an embedded tool into my work schedule will take a little time. On that point, once you’ve signed up to use reMarkable 2, the company sends you note-taking advice ideas (who even knew that the Cornell Method existed?) as email links on its Instagram pages.

Although the reMarkable 2 might not quite be a tree-saving carbon-neutral antidote to paper, it is (arguably) ahead of its time and it represents the kind of tools we will all be using much more naturally in the future… and you can make a note of that. 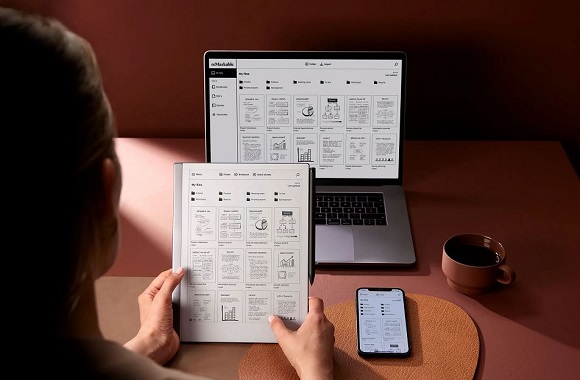 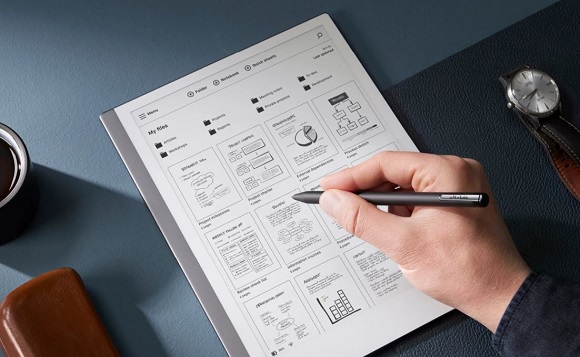