Let’s be clear about this… this is a product review, but it’s also a ‘use case’ review.

The ViewSonic VX3276-2K-mhd 32″ Entertainment Monitor was put under testing scrutiny by the Inspect-a-Gadget team in specific conditions.

Specifically, in a working environment that had previously been undertaken on a 27″ iMac, we questioned whether the monitor could serve as a workable solution to a desk-based professional’s needs that typically gravitates around having at least two full size Word documents open at once, side-by-side (or more usually, one document, one web page and one instance of Tweetdeck or some other app) for daily use.

As an additional test factor, we questioned whether the monitor would seamlessly work with a laptop plugged in to serve as the processing power. As such, we tested more than one laptop and also a toughened Windows tablet from Conker.

But first, let’s look at some of the core specifications of the unit itself from ViewSonic… a company usually described as American/Taiwanese, which is a heady commercial combination and a fusion menu waiting to happen.

The ViewSonic VX3276-2K-mhd gets the 32 part in its name because it’s a sizeable 32” panel screen (31.5” viewable) presented in what the company calls an ultra-slim profile ‘minimalist’ design with WQHD (2560 x 1440) resolution, as explained below.

For the detail orientated out there, the unit itself comes with a metallic silver triangle stand, an edge-to-edge frameless bezel and it features SuperClear® IPS technology (don’t forget the trademark symbol there) and 10-bit colour, which helps produce pretty pleasing colours (perhaps somewhat obviously, but also helps with providing wide viewing angles).

What IPS technology actually does is to give the user the same image quality whether you are looking at the screen from above, below, the front, or the side. What IPS stands for… we have no idea, perhaps it’s Intense Pixel Screen?

Stereo sound is provided by the monitor’s dual integrated speakers, while DisplayPort, Mini DisplayPort and 2 HDMI ports offer connectivity options for both general usage and gaming.

It’s easy to take monitor speakers for granted, until you buy one that doesn’t have any. This is perhaps because many initial monitors (let’s go back to the late 1990s and even the early post millennial years) were built to ship with ‘desktop tower PCs’… and users would be expected to plug in their own pair of JBLs (other PC loudspeaker manufacturers are available) into the 3.5mm headphone socket in the back of the chassis.

Those days are over, thankfully… and the sound is good. Okay it’s not up to iMac standards and does benefit from a boost if you do happen to have an external speaker to add on.

By utilising 10-bit colour, VX3276-2K-mhd is able to produce a colour palette of over one billion colours, resulting in rich vivid colour reproduction (so says the product brochure), smoother gradients and a more natural transition between hues.

ViewSonic’s ViewMode includes optimised ‘Game’, ‘Movie’, ‘Web’, ‘Text’, ‘Mono’ and ‘Mac’ presets… which is arguably rather more than anyone would bother switching between, but is a nice option to have. In the course of normal usage, it’s fine to just leave the unit on Text.

Each preset offers specialised enhancements to gamma curve, colour temperature, contrast and brightness to deliver what is supposed to be the optimal viewing experience for different applications.

But actually, the workability level is good and the fact that our user in this test was moving from a large iMac (as noted at the start) to working with the monitor as an extension from Windows laptops and tablets was a very workable experience with no loss of processing power observed on the machines themselves when being tasked to ‘serve’ a larger external screen real estate.

One thing we didn’t factor in, if you plug a Windows tablet into the machine, you fail to get the full screen filled on the monitor itself. It’s as if the monitor runs restricted to about 90-95 of screen real estate. Obviously this is due to the operating system and is no fault of ViewSonic, but it’s good to know.

The monitor stand was easy to fix (you don’t really even need to look at the instruction manual) and the power up time from OFF is fast (no more than five or six seconds). The unit itself worked better with an HP laptop plugged in and showed all the apps needed with good clarity.

Again one factor the user isn’t perhaps ready for, because you have SO MUCH screen on the ViewSonic 32 incher, you need to think about shrinking the font size on a lot of the apps that you’re used to — so (as many people will already know) simply holding CTRL and scrolling your mouse wheel towards you does this fairly instantaneously.

For those professionals who want to work on a laptop and move around, yet get that much more screen for their buck once they get home, this ViewSonic monitor does a good workable job and the colours and resolution and sharpness are all impressive. We actually used the same Mac desktop picture on the Windows machines in order to try and create a seamless switching experience when the ViewSonic monitor was used alongside the Mac… yes there is a difference, but the freedom factor of being able to plug your mobile unit into a larger screen is pleasingly empowering.

MSRP is around £211 at the time of writing (although some sources offer it lower). 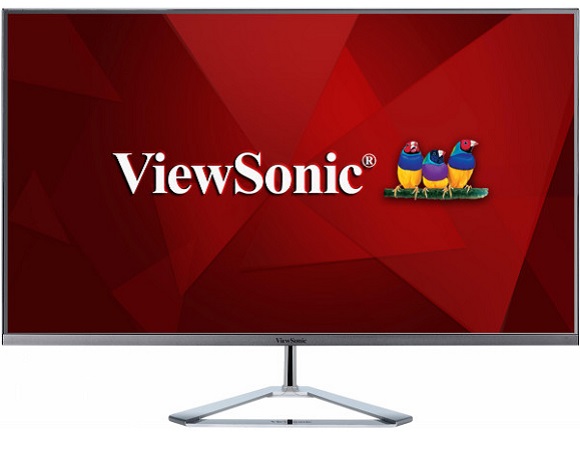 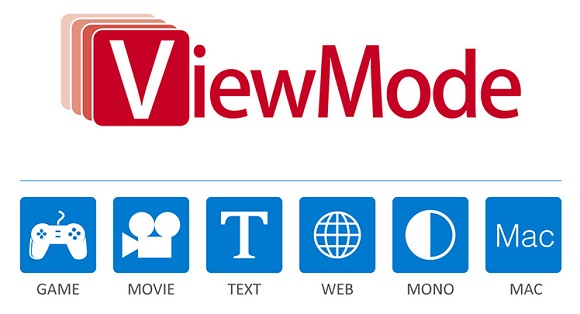 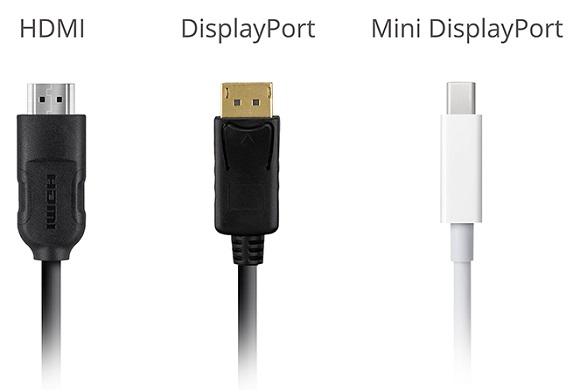